The life of Edgar Allan Poe is a subject of endless and fascinated discussion and debate. But at the core of our fascination with Poe is the work itself – his poems, and literary criticism, and most of all his short stories.

Poe’s short fiction is among the most influential work in any language, and it has defined the genres of detective story, revenge saga, and horror yarn.

Acclaimed actor-playwright Greg Oliver Bodine created POE, TIMES TWO, his new adaptation of two of Poe’s greatest tales to reacquaint audiences with the intensely-felt and finely-wrought drama at the heart of Poe’s stories.  The Cask of Amontillado and The Black Cat – are two of Poe’s most exquisite and pungent tales of revenge.

“Poe, I think many people would agree, is the American Godfather of Gothic horror,” says Bodine. “He’s also widely credited as one of the earliest practitioners of the short story, believing firmly that ‘quality work should be brief and focus on a specific, single effect.’ As an actor and playwright, I always like to leave my audiences wanting more, so the shared themes of horror and revenge in these two stories make them perfect vehicles to combine my passions for classic literature, drama and storytelling in the genre of the macabre.”

Bodine observes that both tales he chose to adapt are narrated in the first person by characters that compel attention and horror in equal measure. He says that this makes them wonderful opportunities for theatrical representation and adaptation.

“Can this character be trusted? Am I being misled? Does he or she have a hidden agenda? These are the questions, which from a dramatic, one-person, storytelling perspective, keep an audience actively engaged,” says Bodine.

POE, TIMES TWO is directed by New York Innovative Theatre award-winning director DeLisa M. White. She says that Poe’s mastery in humanizing evil is at the heart of her approach to directing the piece.

“Poe doesn’t just show us life’s monsters, he asks us to understand and even empathize with them,” White says. “A moral person’s greatest fear is that the skeletons in the dark closet of our heart have more power and strength than we can control.”

In his embodiment of Montresor (the haughty narrator of The Cask of Amontillado) and Alfred (who conjures a fearsome feline in The Black Cat), Bodine stresses that he is keen to convey the recognizable and all-too human aspects of their horrifying acts. “I’ve really endeavored to fully commit to their points of view and not judge them,” he says.

Bodine was specifically attracted by The Black Cat’s clever twist on the dialogue of madness in the narration of its protagonist, Alfred. “For Alfred, language – particularly the character’s insistence on ‘writing a most wild, yet most homely narrative’ – begins as an eloquent attempt to convince the audience of his sanity,” says Bodine.  “Moreover, one could argue that Alfred’s use of language is a tool designed to simultaneously evoke our empathy, admiration and revulsion.  As Poe scholar Martha Womack reminds us, ‘the capacity for violence and horror lies within each of us, no matter how docile and humane our dispositions might appear.’”

Language is also at the heart of Bodine’s attraction to The Cask of Amontillado. “For Montresor, the way he speaks, for instance, tells us volumes about his attitudes of entitlement, class and social hierarchy — particularly how he regards the undeserved success of his boorish, merchant ‘friend,’ Fortunato,” Bodine observes.

White adds that “sitting with these dark souls in a small room in very near darkness” is at the heart of what makes POE, TIMES TWO a compelling theatrical experience.

“Our familiarity with these tales makes you think you are prepared for the experience,” she observes. “But it’s different when you are actually in the same room – and breathing the same air – with a killer.” 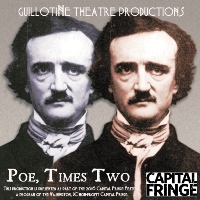