The future of the Capital Fringe Festival has been uncertain since its brilliant and brave inception in 2006, but back in July 2013 its fate was especially iffy. The festival’s fabulously funky Fort Fringe digs on New York Avenue were about to be demolished, and what would become its new home—the cool Logan Fringe Arts Space in Trinidad—was not yet known.

I had become a fan of Fringe and I fervently wanted it to survive and thrive. So in a burst of boosterism, I wrote a column about what’s so darned invaluable about it. My intention was simple: I wanted to send a message of hometown pride to DC lawmakers, funders, builders, real-estate wheeler-dealers, and such, in hopes they would become boosters too.

Excitement among artists and theatergoers is again running high as Capital Fringe 2016 surges ahead with a festival promising 20-plus days packed with “non-stop theatre, dance, music, visual art, and everything in-between.” What better time to remind DC civic leaders of what a good thing they’ve got going on here? 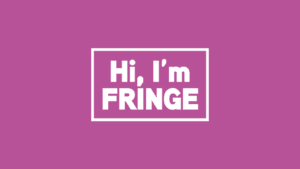 1. Capital Fringe is just the ticket for DC’s surging population of 20- and 30-somethings. This demo now makes up nearly a third of the District’s population and accounted for almost all the District’s growth in the last decade. This insurgent generation has come to town for day jobs, they want fun places to hang out at night, and they’re on a budget. Capital Fringe caters to this discerning crowd like nobody’s business—and oldsters who make grants, policy, and real-estate deals need to take care not to screw it up.

2. Capital Fringe is a model of volunteerism in the private sector. Remember “1,000 points of light”? It’s still around, what Bush senior dubbed his national work-for-nothing-for-the-greater-good initiative to “keep America moving forward, always forward—for a better America, for an endless enduring dream.” Wanna see that illustrious legacy in action? Check out the 400-plus volunteers who each year flock to Capital Fringe and work their butts off. And that’s not counting all the unpaid casts and production crews. Civic mothers and fathers: Don’t mess with this unselfishness. Point to it with pride.

3. Capital Fringe is of the people, by the people, and for the people. That’s what the United States is alleged to be, but Capital Fringe actually is. The whole shebang is unjuried, meaning anyone who wants to play can play; first come, first in; no grand high poobah chooses. There is astute curation, however, and it’s crowd-sourced. Once word-of-mouth buzz begins and reviewers weigh in, some shows start selling out, and then, when the runs are all over, there’s a people’s-choice competition online that picks the best of the fest. Here in America’s hometown, is there an entity or enterprise that does democracy any better?

4. Capital Fringe protects performing arts from capital. In the U.S., live theater and economics are at best a marriage of convenience. America has no subsidy for live theater comparable to that of, say, Germany or the UK. Consequently artistic decisions in big theater-production companies often get driven by investors and funders who, no matter how well-intentioned, could probably not direct a scene or design a set. Capital Fringe offers a respite, a kind of free-form farmers market in which to proffer fresh-grown produce without big-box retail overhead and genetically modified fiscal taste. This does the District good.

5. Capital Fringe brazenly blends and blurs high brow and low brow. And that’s a good thing. Just ask Shakespeare or Aristophanes. The economic stratification of America has had devastating consequences—a point activists made eloquently on behalf of the 99 percent. Related yet not much noted is the divide that has been driven between elite and mass culture, a trend totally counter to the origins and intrinsic worth of theater. Meanwhile Capital Fringe does populist alongside proper, lewd alongside lyrical, burlesque alongside belletristic. It’s an inspired mashup—and thereby more faithful to theater’s past than what a well-heeled subscription audience is likely to view on a vast proscenium stage. Here in DC where more history is enshrined per square mile than anyplace else in America, let’s remember that people’s history is only alive if it’s allowed to live free. And that goes for the people’s living theater too.

Read our 2015 Reviews and Previews.

Read our 2014 Reviews and Previews.

Read our 2013 Reviews and Previews.

Read our 2012 Reviews and Previews.