In Part 1 of a series of interviews with the cast of Prince William Little Theatre’s production of Cabaret, meet Aaron Verchot-Ware and Katherine Bisulca.

Joel: Please introduce yourself, and tell us where local audiences may have seen you perform before?

Aaron: My name is Aaron Verchot-Ware, and I currently serve as Vice President of Unquiet Theatre Company (newly based out of Alexandria, Virginia). I entered the community theatre scene during their production of The Rocky Horror Show in 2014, and since then, I have been involved in several productions on and off stage. Most recently, I had the pleasure of working with choreographer Caroline Simpson as her Assistant Director for Sherlock Holmes And The West End Horror with Prince William Little Theatre, and in Dominion Stage’s Carrie: The Musical as Freddy.

Katherine: I’m Katherine Bisulca, and I’ve been involved in local community theatre for over ten years. You may have seen me more recently as Peter Pan or Juliet with Castaways Repertory Theatre.

Who do you play in this production, and how are you and your character alike and different?

Aaron: My role in this production is Ernst Ludwig, a German man who befriends Cliff Bradshaw when he arrives in Berlin and sets him up in Fräulein Schneider’s boarding house. My character and myself are both friendly and likable individuals. However, where we differ is in Ernst’s affinity in using his charm in order to coerce others into doing his dirty work for him.

Katherine: I play Fräulein Kost, and have grown to admire her practical method of dealing with a very difficult life. She is able to look at her situation, figure out what she thinks is best, and then step forward and just do it. Ultimately, although I can’t agree with some of her choices, I have to respect her tenacity.

How did you prepare for your role, and what was one challenge you faced in doing so?

Aaron: The biggest challenge I have in preparing for this role is mastering the German accent. It is absolutely essential to the portrayal of this character, and I look forward to doing it justice. The other challenge for me is then singing in this accent, which requires you to be more closed. As a classically trained singer, “closed” is not a word I hear very often (unless I’m singing poorly, which my coach, Kevin Diana, will be sure to point out).

Katherine: I always spend a significant amount of time thinking about who my character is, what they want, and why they do what they do. For this particular role, learning the German accent was quite a challenge for me. However, I have loved the opportunity to learn something new, which is always what I am looking for as an actor.

What is it about Cabaret surprised you the most?

Aaron: I was very unaware of Cabaret and its characters upon first auditioning for the show. All I knew is that I wanted to work with Matt (director) and Caroline again, not to mention my husband and my roommate, who appear in the show as Herman and Rosie, respectively. The first thing that surprised me about this show was how incredibly happy and how incredibly sad it could make me feel. The show has about an equal amount of amazingly wonderful songs and dances as it does depressing ones.

Katherine: I have noticed while working on this production the threat that the anti-semitic element adds to the story (which was not so clear to me when I watched the film). It is a profound experience to be able to feel that unease, that growing sense of dread, and be able to connect very strongly with what was going on in Germany at the time. It reminds us that ignoring problems won’t make them disappear, which is highlighted both in Sally’s story and the surrounding political climate. 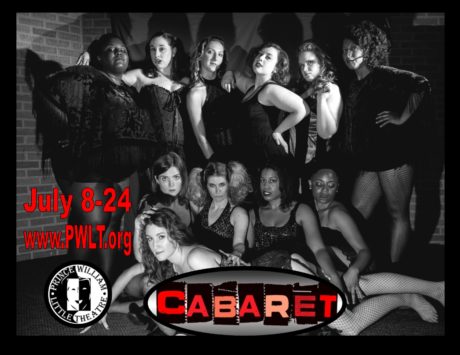 What is your favorite song in the show (whether you sing it or not), and why?

Aaron: I would have to say that my favorite song in the show has got to be “Tomorrow Belongs To Me.” Being the only song I truly sing on stage for, I am partial to it. However, I have a lovely duet partner in Katherine Bisulca. I have known her for some time, but I am excited to finally share the stage with her. Also, my husband will be singing the first “Tomorrow Belongs To Me” in the show, and I love to hear him sing. I sing the reprise.

Katherine: My favorite song in the show is most definitely “Married,” which Schneider and Schultz sing together. To me, those two characters are the absolute heart of the show, and their romance is both beautiful and heartbreaking (which oftentimes go hand in hand, I’ve found).

What’s next for you after this production closes?

Aaron: After this production, I’ll be helping out with Unquiet Theatre Company’s production of Bloody Bloody Andrew Jackson. I’ll be working behind the scenes, but auditioning as well.

Katherine: My goal after the show closes is to start pursuing professional acting roles. I have also recently started doing some film work, which I have enjoyed tremendously, and would like to continue to do.

How is this show relevant to contemporary audiences, and why should people come to see this production of Cabaret?

Aaron: This show is a reminder that the darkest parts of our history are doomed to be repeated if we are not able to recognize the signs. The notions of bigotry, self-involvement, hedonism, and ignorance are a parallel of the current political landscape we find ourselves in. People should come see this production because it will surprise and humble you. The talent that has been assembled to tell this story is staggering. You are going to experience a full range of human emotion, and by the end of it, you will be just as tired as the actors on stage.

Katherine: I think this show is a reminder that our inaction is a form of action that affects other people. Whether it’s personal battles or serious social issues, burying your head in the sand will only delay the inevitable, and hurt those you care about in the process.


‘Come to Their Cabaret’: Meet the Cast of PWLT’s ‘Cabaret’: Part 2: James Maxted.

‘Come to Their Cabaret’: Meet the Cast of PWLT’s ‘Cabaret’: Part 3: Catherine Lyon and Larry Keeling.