Trump’s Theatrics Play Out On The Fringe Festival Stage

Believe it or not, John Krizel had the idea and title for his play Let Trump Be Trump months before the slogan, a wink to The West Wing wonks, became headline-worthy. Now, in the wake of the 2016 primaries, Brexit, and more outlandish Tweets than he can keep up with, Krizel finds that his quippy satire about the hypothetical Trump presidency has taken on new magnitude. 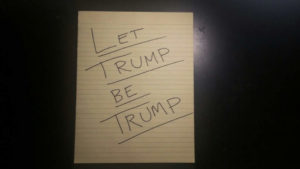 Let Trump Be Trump follows four White House staffers on a mission to pass a controversial bill six months into Trump’s presidency. Krizel drew heavily off of three episodes in The West Wing’s first season to frame the plot; savvy fans will find themselves engrossed in catching “Sorkin-isms” peppered throughout, which Krizel included as a way to pay homage to the writer he calls “a legitimate genius.” That’s not to say you have to be a West Wing aficionado to appreciate Let Trump Be Trump, though; anyone who has one ear tuned to today’s current events will feel in on the joke. But will they be laughing?

“I’ve had many people tell me that they worry that the subject matter of the play is ‘too real’ now,” he said, “that the idea of a play about Trump was much more appealing to them back before he was one of the two people with a real chance to actually be the President. I’ve felt that, too: the prospect of doing this has gotten ever more daunting with every passing primary.”

Krizel says he started writing Let Trump Be Trump in December of 2015, before any votes had been cast.

“At that point there were so many different ways that this could have gone,” he said. It wasn’t until Trump won New Hampshire and South Carolina in February that Krizel realized he might be fleshing out material that could still strike a nerve come the Capital Fringe Festival in July. “This was really fertile creative ground. Because instead of just poking fun at a buffoon, I got to try to explore how he has succeeded, in a way that no one in the political media would have predicted a year ago.”

By day he is a high school social studies teacher in Fairfax County, but Krizel is no stranger to the demands of playwriting, or the Fringe Festival for that matter. He has written, directed, and produced three plays for the annual festival in previous years. The Program Assistant (2014), Social Media Expert (2013), and In This Economy (2012) garnered critical acclaim for their hyper local focus, capturing the essence of twenty-somethings coming into their own in DC. His current venture brushes on a few similar ideas, but he is careful to make one distinction.

“I’ve enjoyed writing about young people who are figuring their lives out,” said Krizel. “What’s most interesting to me about living here, and writing about DC, is the difference between ‘Washington’ and ‘DC.’ This is the first time I’ve written about ‘Washington.’ about the government and power and influence and all that House of Cards BS that everyone hates (or loves to hate).”

And what better way to satirize this power struggle, imagined here in the hands of a man many deem a fear monger and demagogue, than through the lens of America’s quintessential, revolutionary political drama: Aaron Sorkin’s The West Wing.

“I’ve been a fan of The West Wing for a long time,” Krizel said. “I know that many people have pursued careers in public service because they wanted to be Sam Seaborn or Josh Lyman or CJ Cregg, and I know that most of them live in this city. I thought it would be funny to apply these archetypes that fans know so well to Trump, whose message is as cynical as Sorkin’s is idealistic.“

He continued, “Our show is going to be entertaining and funny, but I want people to grapple with their own ideas about why this has happened. I don’t think most people have satisfactorily answered that question. I’m not saying I have the right answer, because I almost certainly don’t, but I’m hoping the play gets people thinking about it.

Let Trump Be Trump, by John Krizel is directed by Paul Lysek. 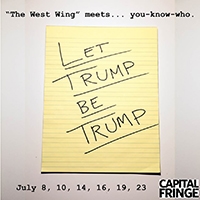