Award-winning new play examines the heartbreak and humor of death.

The story of Coping began with a tragedy; a friend of Playwright Jacob Marx Rice, who had been struggling with depression for years, committed suicide. “I found out via a Facebook invite to his memorial page,” Rice explains. “I had three notifications: a couple people liked a status about something I can’t remember, someone tagged me in a photo, and my friend was dead. It felt like being hit by a bus.” In the aftermath of the suicide, people began to come together to tell stories of their experiences with the person who had passed. Many of these stories were funny, even joyful. “It felt weird to be laughing when we felt so horrible,” Rice says, “but it was also healing. The only answer to death is life.” 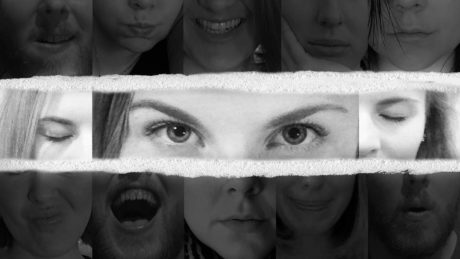 Rice began writing Coping as a way of understanding and confronting the loss. “I wanted to earnestly engage with questions of mental illness and suicide. They affect so many people and almost nobody ever talks about them. At the same time, I think comedy is the only way, at least for me, to approach a topic this serious. Despair doesn’t help anybody.” Producer Amanda Nelson agrees, “One of my favorite things about Coping is that it deals with intense, heavy subject matter, but finds the humor – it makes me laugh and cry.”

After 9 months in development, Coping was produced last year at the New York International Fringe Festival. The production sold out its run and was extended into the Encore Series, as well as winning FringeFAVE. StageBuddy hailed its “raw emotion and plenty of humor” while Quick Theatre called it “a finely crafted theatrical piece that knocks the wind right out of the audience.” OnStage claimed, “It is doubtful the audience will ever understand the process of coping in traditional ways again after seeing Coping.”

Earlier this year, Rice began talking with DC-based Director Joshua Kelley about bringing the play to Washington. Kelley says, “When a draft of Coping found its way into my inbox last Fall, it became clear that it was the most important play I could be doing in 2016. We live in a world of overwhelming buzzwords like ‘suicide,’ ‘mental illness,’ and ‘gun control.’ What we often forget are the real human experiences that these words obscure; experiences that Jacob has a knack for capturing in all their love-drenched, pain-smeared, misguided-but-well-intentioned glory.” They talked with Nelson and decided to bring the play to the DC Fringe. Nelson says, “Coping is so raw and honest. It’s not about big spectacle or a huge set, it’s about humanity. I think Capital Fringe is the perfect place for Coping – showcasing Jacob’s beautiful words and Joshua’s intelligent direction. I can’t wait for DC audiences to see this production.” Jacob agrees, “I am so excited to be a part of the DC Fringe. I hope we can make people laugh and, even more importantly, bring attention to these issues.”

In the aftermath of 25-year-old Connor’s suicide, his girlfriend, sister, and roommate try desperately to make things right, place blame, and confront their own battles with mental illness. Wickedly funny and shockingly tender, Coping explores and explodes our experience of grief, mental illness, and family. 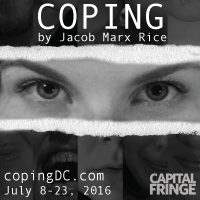 Check out copingDC.com for more information.