The Real World: Kabul is a comedy based on real events of three American writers who traveled to Afghanistan in 2009 to write, of all things, a soap opera for the Muslim world’s “biggest media mogul.” Written and produced by Emily Liner, Emily Liner, who is also a Policy Advisor in the Economic Program at a think tank, the play highlights the juxtaposition of what are essentially stereotypical Americans in a world of such serious religiosity and high-stakes strife as Afghanistan. 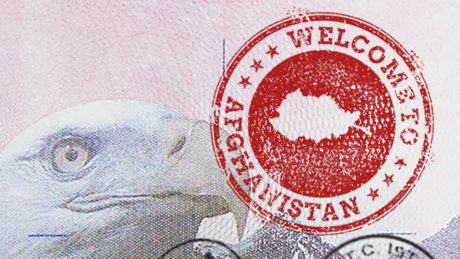 The writers are two women and a man: Kat Hamilton (Mo O’Rourke), a sarcastic and guarded woman with a secret; Colt Landry (Bryan Norrington), a former Marine who plays the token “bro on campus” endemic to reality TV (a la The Situation), and Maya Anderson (Simone Lewis). The cast is filled out with Nina Marti, playing Mehri Rafaat, an Afghan woman that acts as liaison between the studio and the Americans, and Omar Rocha, who does double duty as both Mr. Abdul, the media mogul, and a bodyguard.

Sarah Scafidi directs this sometimes painfully dull script, perhaps purposefully dull. Many of the jokes fall flat — but perhaps that is also intended, are we watching these characters as they are or are they themselves reading a script on a reality TV show? It’s hard to say, and perhaps therein lies the more interesting read of the work.

The play simultaneously glorifies and pokes fun of American culture; this riff on the Real World shows us our own ugly pop culture at its most insensitive. These three aren’t people we want to know in America, let alone send to another country to represent our country. They are self-obsessed and preening, and I can’t say I’m better for having spent 95 minutes with them.