Bucky Mitchell, Jr. presents an intelligently written and thought-provoking new play at the Upstairs Theatre of the Logan Fringe Arts Space, a comedy reminiscent of the cerebral metatheatrical work of the like of Pirandello or Stoppard.

Alex (Chris Hrozencik) is a first-time actor who remarkably finds himself surrounded by seasoned professionals, and proceeds to interrogate them about their processes, in a mostly failed effort to relieve his own paralyzing stage fright. As they offer him increasingly disappointing suggestions from Delsarte, Stanislavsky, Strassberg, and their own intuitive or technical approaches, they inadvertently expose their extensive human failings, from Luther’s bigotry to Katrina’s emotional unavailability, from Walter’s fear of aging to Reggie’s fear of vulnerability. Simultaneously, they call upon their spectators to embrace choice in their lives as they struggle to understand the very choices they make on and off the stage. 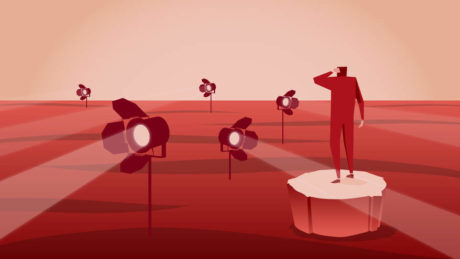 An interesting element of the performance is how the actors embody the very systems they advocate. Charlotte Blacklock’s Katrina advocates giving herself over to the playwright’s words and vision, and her performance suggests sheer joy in the delivery of beautiful language. Jaylene Arnold’s Reggie holds herself with regal poise, suggesting the strength and precision of Delsarte.  Marlon Russ’ focused reactions to the perceived stupidity of his fellow actors suggests the earthy honest of Stanislavsky realism.

The quiet brooding of Mitchell matches his unsettling suggestion that Alex needs to kill someone before he can play a murderer, and mirrors such legendary “method” actors as Marlon Brando or Daniel Day-Lewis. Hrozencik is energetic and talented, drawing some laughs, but he begins the play in frenzy and doesn’t give himself sufficient room to accelerate his frustration. Seeing the character listening more reflectively and building to his internal climax might better serve the play’s journey, as it depends on us wondering about our own choices in art and life.

Tech is simple, as is the nature of fringe, but Mitchell’s set lays out the right ambience of a crowded “green room,” and touches of costuming and light, particularly the pre-show “dress-up” and dramatic focus on Alex’s final epiphany, are neatly blended with the action to create subtle metaphors.

Before the Lights Go Up is a solid production of a smart new play, precisely the kind of dramatic offering Fringe was created to showcase.