It’s a typical love story, but with more rejection.

In the Whit West Theatre Company’s musical, Complexity: A One Woman Show, directed by Ileana Fortuno and choreographed by Katie Kiessling, Beth (Kylie Westerbeck) starts off with a blank slate in a new city, enamored by the environment and many possibilities. The sight of rejection, though, causes all of Beth’s giggly, girlish enthusiasm to dry up. After being denied a job offer at a coffee shop, she falls into depression, lying in bed all day. In that apartment, she remains for the rest of the musical, not moving and not really progressing in her life. 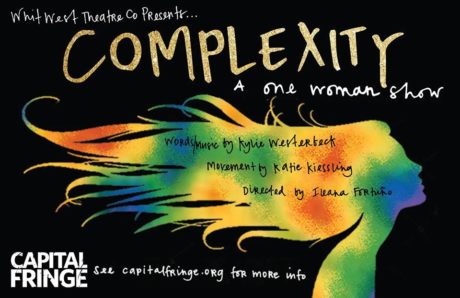 In the theatre program, it states that Complexity is meant to ask the question, “Who is capable of love?” But the real question for me throughout the musical seems to be, “Why should anyone sacrifice their needs for someone who is listless about their own?”

While titled Complexity, there is little to no complexity in the plot, itself.

The design of the show is also similarly simple. Dana Melnyk set up moveable black boxes and walls on wheels that swing around the stage when desired.

Westerbeck, also the composer and playwright, seems to wish for others to sympathize with Beth as she sings about missing her friend and roommate, James (Dana Lee Capanna), but there’s little reason to.

In the story, James is the more stable of the two. While with a job, James is also unencumbered by lazier activities like wearing pajamas throughout the day. Rather than understand James’ busier schedule, Beth sees James as another source of rejection, someone not valuing her above other activities. But there are few to no reasons given as to why James should value Beth’s needs

The clever and cute part of the story that I did enjoy was when Beth and her eventual love interest, John (the sweet William McGlone), don’t see each other, but hear each other. The song that brings them together is similar to the beginning of “When the Saints Go Marching In,” uplifting and repetitive. Banging on the wall between her apartment and his, Beth insists he stop playing his piano so loudly. They then quibble about how he’s playing in the afternoon and whether or not either are in the right to judge each other.

Leah Cohen and Beatrice Alonna provided some wonderful vocals. In one of songs  (the song titles were, unfortunately, not in the program- composed by Westerbeck, Beth wails about loss, but throughout the musical, it seems as though one is not meant to take her seriously.

Is this a comedy? Is this a tragedy? It’s not certain.

Running Time: 65 minutes, with no intermission