The King’s Players are presenting an exploration of modern love and supernatural forces, by Founding Artistic Director Timothy R. King, at the Trinidad Theatre for the 2016 Capital Fringe Festival.  Flavored like a combination of Lost Girl and Grace and Frankie, King’s play boldly showcases difficult relationships between women, centered on the object of both Zoe (Jane Gibbins-Harding) and Sydney’s (Brittany Morgan) affections, the musically gifted Aria (Grace Duah).  Their lovers, respectively, are ill-fated and unrequited, as Aria embraces Zoe, rejects Sydney, and promptly dies. 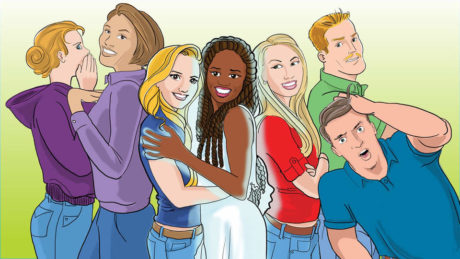 In this world of music and magick, the central love triangle doesn’t end with mortal death.  Aria’s spirit, bound to Sydney by magick, becomes an apparition and witnesses her own memory being abused and the love she rejected, attempting to seduce the love she left behind.

The cast are well suited to their roles. Morgan has a weighty sadness that fits Sydney’s grief and impulsive lonliness. Duah’s voice and theatricality deliver some of the best moments of theme and counterpoint. Irzinski is sincere as the husband and father caught off guard by the pain facing all three women in his life. King himself takes a turn as the most interesting character in the play, the owner of the magick shop who helps Sydney solve her “wraith” problem. At the same time, the performances could benefit from a bit more polish and nuance in the direction, as some blocking seems to wander and some moments seem overplayed for comedic effect.

Ultimately, the play is well worth the viewing. It raises interesting points about the nature of loss and the secrets that can be carried with us, and certainly the long-suffering hidden romance between Sydney’s mother and her best friend provides the richest counterpoint. It has the feeling a of a play that has more potential than shown in its premiere, touching as it does on supernatural forces, the relationship between music and human experience, and the secrets we keep as we go on our own mortal and immortal journeys.

Audiences will enjoy the humor, the charming performances, and the gorgeous (mostly original) music by Nila Kay, while also looking forward to seeing King and company deliver a more sophisticated exploration of these ground-breaking dramatic elements as the work develops.