The Silver Finch Arts Collective is back at the Fringe Festival with their first children’s show: Once Upon a Bedtime. But what a sophisticated children’s show! Five skilled musicians lead a cast of accomplished singers through an enchanting opera. And fear not parents, your children will be so entranced by this world of magical scarves and talking horses that they won’t even realize they are watching their first opera. 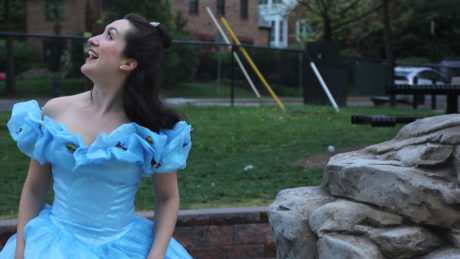 Producer and Music Director Michael Oberhauser uses the children’s opera The Goose Girl by Thomas Pasatieri as the heart of Once Upon a Bedtime and frames it with an introductory and closing story (composed by himself with text by Shannon Berry) of a young girl asking to be read a bedtime story.

The young girl is played by Daven Ralston who fills the stage with her childlike enthusiasm and dancer’s presence, cavorting with her toys and begging her mother (Amy Alvino) to read her the Goose Girl story while the untitled opening score is played onstage by a tight-knit quintet conducted by Oberhauser. (Kimberly Eloshway on flute, Elena Forbes on clarinet, Andrew Weaver on Viola, Sophie Chang and (alternate) Katie Chambers on cello, and Liz Hill on piano.)

The Goose Girl story performers each deserve commendation for their strong, consistent operatic vocals. The cast is led by soprano Courtney Kalbacker as the princess and her delightful companion baritone Andrew Sauvageau as Falada the talking horse. Mezzo-Soprano Tricia Lepofsky plays a wonderfully despicable waiting woman. Children will delight when they get to vote on her fate after her plan to snatch the prince for herself is foiled. The cast is rounded out by Molly Pinson Simoneau as the Queen, Miles Herr as Conrad, Rameen Chaharbaghi as the Prince, and Jeffrey Grayson Gates as the King.

Thomas Pasatieri’s opera is quite beautiful and the new compositions by Oberhauser meld perfectly with the original. I was impressed by the seamless transition from the end of the Goose Girl story to the final bedtime scene created through music and dreamscape lighting (by Ryan Stanton). I did feel that the initial transition from the opening scene to the Goose Girl story was a bit abrupt and could benefit from a similar musical and lighting interlude to indicate that we were now entering the world of the Goose Girl book. Music would also help mask the sound of the bubble machine (yes, kids, there are bubbles!) which was a lovely visual effect but audibly distracting.

Director and designer Nick Vargas draws on his experience from Imagination Stage for this production, crafting a show that is sophisticated enough to impress adults but completely accessible to children. The set was a simple chair, chest and bed that was creatively repurposed through the show into a stable and throne. The girl’s stuffed animals from the opening scene appear again in the stable to represent the geese.

I highly recommend this show for adult opera lovers and parents who want to introduce their children to opera. As a mother of young children myself, let me say that I wish bedtime felt this glorious!

2016 Capital Fringe Preview #6: ‘Once Upon a Bedtime’ by Michael Oberhauser.