Imagine, if you can, that it is July 2017 and Donald J. Trump has been elected as the 45th President of the United States. While some of you might find that prospect wonderful and others horrifying, the ultra-talented playwright John Krizel does just that with his thought-provoking new comedy Let Trump Be Trump. Krizel’s vivid imagination and sophisticated wit provide a sparkling political satire that is simultaneously delightful and disturbing.

Let Trump Be Trump is a faithful homage to Aaron Sorkin’s critically-acclaimed television legend The West Wing.  The groundbreaking political drama ran for seven seasons from 1999 through 2006 and explored the lives of White House staffers who served a fictitious president named Josiah Bartlet. Not coincidentally, Episode 19 of the first season was entitled, “Let Bartlet Be Bartlet.” 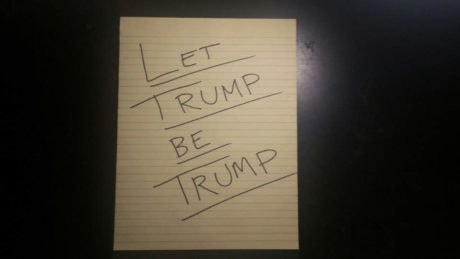 The story opens with four young, highly-motivated professionals working feverishly to get President Trump’s controversial immigration bill approved by Congress. Six months into his presidency, their boss is still the subject of rumors and suspicion among the Washington, DC crowd, which makes the staff’s assignment all the more challenging. They have accomplished only one thing—reducing the size of the Federal government—but that only happened because half a million Federal employees resigned the day after Trump’s inauguration!

Their world is made up of equal parts of gloom and glee, where the words “compromise” and “apologize” are considered profane, and where they are often plagued by indecision. At a certain point, the group acknowledges that their current tactics are not working, so they decide to change their approach.

Director Paul Lysek skillfully guides the cast through the same type of fast-paced, clever dialogue that was the hallmark of the play’s video progenitor, as he evokes a nasty, negatively charged Beltway atmosphere which eerily mirrors today’s presidential campaign. Not to worry, however, Let Trump Be Trump is played strictly for laughs.

The cast includes the talented and handsome Brendan Hunt as the ambitious Communications Director “James,” who is perfectly willing to do whatever is necessary at any given time and who has no noticeable convictions.

Kendall Helblig shines as “AJ”, the Press Secretary who seems to have at least some scruples in the way she approaches her job. The role of Deputy Chief of Staff “Lindsay,” who proclaims her convictions at the top of her lungs, is beautifully played by Alison Donnelly. And Andy De turns in a moving performance as “Gordon”, the Chief of Staff, who is a true conservative struggling with conflicting values.

Noah Cooper-Hauser takes on a challenging dual assignment as “Chuck” the good-guy reporter who might or might not have a crush on AJ, and the arrogant Undersecretary of State “Walker”—and does a fine job with both roles.

Hilary Morrow is compelling in her portrayal of powerful Congresswomen Stackhouse, whom the staffers are trying to convince to support the immigration bill. Victoria Meyers is outrageous and fun in a small but pivotal role credited only as “T.”

Although set design is not specifically credited, the sets are clever and effective. In addition to appropriate office furniture and equipment, there are actual and fake tweets from Donald Trump, which are projected on a screen upstage. And, some of the actual tweets are funnier than the fake ones!

Let Trump Be Trump is a brilliantly crafted fantasy.The crisp and polished dialogue and sophisticated humor educates the audience without talking down to them. In fact, under the heading “laughter is the best medicine”, this intelligent satire provides today’s beleaguered voters with some much-needed (comic) relief!

LINK:
Read the preview of ‘Let Trump Be Trump.’