The young actor and rapper Darius McCall fell so much in love with the role of Romeo that he longed to bring the character to life, by himself, alone on stage with but Shakespeare’s words and his own heart and soul to guide him. On the evidence of his portrayal in One Man Romeo, it would be more accurate to say he fell in love with Romeo’s loving, for  he brings the character’s ardor for Juliette to life so beautifully and tenderly one could forget she’s not there. 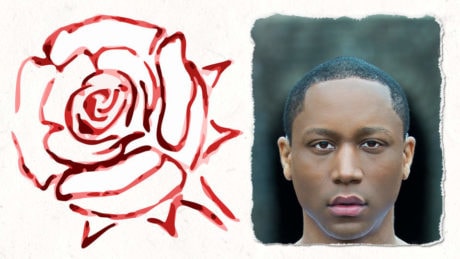 Well, she is there, in a way. The spare set at Caos on F is a carpeted platform on which stands a catafalque draped in white linen. Lying upon it as if lifeless is the figure of a young woman, her face covered by a white veil. At the beginning, while the audience files in, McCall lies face down on the stage floor like a corpse himself. Once McCall comes to in character, dressed handsomely in a fine Elizabethan-ish doublet, he takes us into Romeo’s dreamt recollection, reenacting as if in the present all that led up to his death alongside his love.

The text is pieced together solely from speeches Shakespeare wrote for Romeo. It features the monologues but also includes a lot of dialogue, which McCall handles ably, reacting in each split second in each exchange to what implied other voices say. The scenes are separated by blackouts during which evocative period-like music plays (Ben Fisler is credited as composer).

The text excerpts are not exactly sequential, and since they were not written to have free-standing exposition, one has to know the story to track what’s going on. As such, the show does not quite comprise a complete theater experience. But even if one is not familiar with Romeo’s character arc in the play, One Man Romeo as directed by Estelle Miller offers a hugely satisfying portrait of an actor personally engaging with a part.

McCall’s performance is exquisitely sensitive. With remarkable physical presence and riveting facial luminescence, he seems to act from deep within each moment to moment emotion, such that at times Romeo the character becomes newborn before our eyes.

I was especially touched, for instance, by the scene at the masked ball when Romeo first beholds Juliette. McCall’s sweet tearful kisses are not to the air; they are to someone beloved who in his heart and ours is as real as can be.

His mission as a performer, says his bio, is

to show the world that no one can hold him down regardless of what they say about his disability or path in life. His commitment to excellence and strong drive for the passion of arts will blaze a trail for others who struggle like him to realize their dreams in achieving what they believe in.

Something about that drive to realize one’s dreams comes through vividly and viscerally in McCall’s Fringe show. The passion of the character and the passion of the player become one in One Man Romeo.

Running Time: About an hour with no intermission.

All remaining performances will have an ASL interpreter.

Check the preview for ‘One Man Romeo.’