William Shakespeare serves as playwright Annie Bryan’s inspiration for Dodgeball Theatre’s Macbeth in the Basement, directed by Talley Murphy. The show features only five actors and a limited set, and Bryan tries weaving a modern retelling focused on school shootings with the Bard’s original text. While they’re delivering a powerful message, the mash-up is uneven at times. 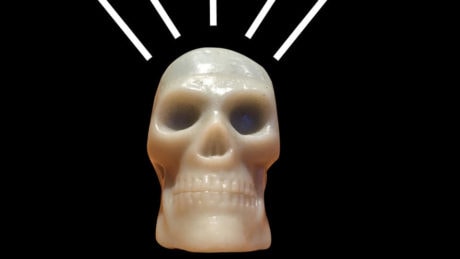 The minimal set designed by Lhana Ormenyi is well thought out. With only a few stools and a door-flap, the real star of the technical show is the music. First-time composer Nick Kemp delivers a fantastic soundtrack that follows the ebb and flow of emotions perfectly.

Macbeth in the Basement features some great performances. Meghan Boroughs is a poignant Duncan. She and Macduff, played by Lindsay Garber, deliver some of the most emotional moments of the show. Alex Warren is a charged Malcolm, his energy throughout the performance can carry the others at times.

John Posner and Regina Coyle, as Macbeth and Lady M respectively, deliver standout performances as the “It Couple” of Cumberland. They’re able to weave seamlessly between Shakespeare’s words and Bryan’s and it’s awesome to watch. Coyle’s portrayal of a young Lady Macbeth /Queen Bee is especially great.

There are times throughout the play where I feel more of the original text could be adapted in favor of the intended message. Julius Caesar may have been a better choice of source material to raise awareness about modern-day teenagers’ social dynamics, peer pressure, and school shootings.

Macbeth in the Basement‘s performances are exceptional and the soundtrack is unique; it’s an interesting production for any fan of Shakespeare to check out.

Read the preview of ‘Macbeth in the Basement.’