In his enigmatic but slight one-man show, entitled The Computer That Loved, written and performed by Erik Mueller (as part of the exciting Fringe Festival) a real-life story is presented in a matter–of-fact manner —which often belies the intriguing concept behind the material. 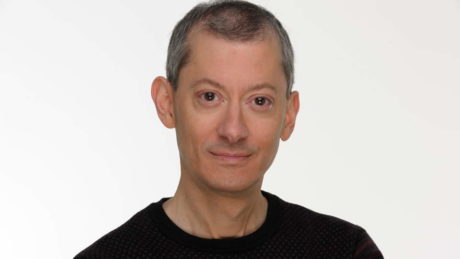 Mr. Mueller has written a show worth seeing indeed but much of the emotional payoff depends on one’s ability to be truly interested in a production that focuses so heavily on the dynamics between specialized computer/technological knowledge utilized as compensation for an individual’s awkward attempts to enter into a truly satisfying human relationship.

In Mr. Mueller’s introspective journey, a free–flowing series of narrative monologues, vignettes, and anecdotes (replete with some very amusing role-playing by Mueller) propels the audience through actor Mueller’s growing pains as he dates an interesting assortment of women, attends university, and –concurrently—excels as a computer wizard (Mr. Mueller received his Ph.D. in Computer Science from UCLA).

During the process of discovering his true passion for computers, we witness the intermingling of the mechanized, computerized world with Mueller’s attempts to create an authentic emotional connection.

As Mr. Mueller narrates his adventures in the intimate Argonaut Theatre space, I could sense a sustained attempt to break though the monotony of his real life experiences —a monotony that was mirrored in the monotone vocal delivery that Mr. Mueller employed to, perhaps, mirror the mechanized side of his personality. As Mueller starts to break out of his self-protective shell, this very compressed one-man show picks up some vital propulsion.

Artificial Intelligence and the Watson Question Answering System (that beat human champions on the television show Jeopardy) are both discussed and one could plainly see that “the computer that loved” is Mr. Mueller himself. The love of logic and programming has merged with Mr. Mueller’s humanity.

When having to face his adored wife Lisa’s life-threatening illness and his love for his son Tyler, Mr. Mueller’s breakthrough is complete as he joyfully exclaims and realized that “Life is finite and the World isn’t perfect. People are perfect and that is what matters.”

Mr. Mueller breaks out of the self-imposed prison of his own specialized intelligence and allows himself to love. Indeed, this appeared to be the message of this play.

The idea behind this production is certainly commendable but only for those seriously interested in a show that runs so swiftly through events that need more exploration and development. I must heartily applaud this interesting theatrical experiment and the audacious verve it must have taken Mr. Mueller to present this production.

Mention must be given to Director Clancey Yovanovich and Lighting Designer/Board Operator Leigh A. Mumford.

Running Time: 30 minutes, with no intermission.