The director’s program note for Cracked (now playing upstairs at the Logan Fringe Arts Center) says that the play “asks what does it take to be a man?”, and this is the most cogent summary of the piece’s theme. The first part of a planned Broken Mirror Trilogy, the play’s three main characters – Henry MacDonald (playwright/director Marcus Salley), his only son Douglas (Meaux Nowlin), and Doug’s bad boy best friend, Willie (Roody Labaze) – struggle with this concept throughout the play in different ways. Henry, who once in a fit of desperation robbed store and was jailed for it, is trying to rebuild his life with his family. As the play opens, he is essentially caring for his four children alone, as his wife Mattie (Jasmine Baker, seen and enjoyed all too briefly) has moved to New York where she can find better-paying work and where Henry cannot join her because of the terms of his parole. A proud man, Henry clings tenaciously to the MacDonald family history of dignity and respectability, as he works to provide a moral compass for his children, despite often feeling he has failed them through his mistake. 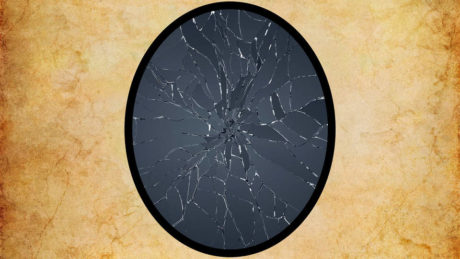 Willie, also called Chick, initially appears as the iconic James Dean bad boy: smoking, drinking, cursing and apparently afraid of nothing and no one. When Henry’s oldest daughter, Gale (Ashlee’ James) asks him if he has any daydreams, he replies flippantly, “Not one.” Willie apparently defines his manhood primarily through his ability to seduce as many women as possible, whom he then rejects as “easy”. However, we soon learn that he has deeper layers he only shares with those he trusts…or those he is trying to get to trust him.

Doug, meanwhile, is pulled between these two powerful forces in his life in trying to make sense of what he’s supposed to be when he grows up. He respects his father and sometimes reluctantly sees himself as Henry’s deputy with his three sisters (James, Roodyanne Labaze and Lauryn Hobbs). But Willie’s free and easy lifestyle appeals to him, although it is not something he wants around the girls in his family. But then Willie manages to convince Gale to go on one date with him, and things immediately get complicated.

Marcus Salley largely wears his three hats of director, playwright and actor with ease. When I spoke to him briefly after the play, he indicated that he brought on several former students to be on the production crew (he teaches drama at Colonial Forge High School), because they understood the way that he thinks and his vision, and therefore it was easy to delegate to those people while he was focusing on being on stage. If this is an accurate reflection of his process, it generally stands him in good stead. Stage Manager Emily Adaway does a great job of managing the transitions between scenes, and making sure that everyone and everything ends up where it’s supposed to when it’s supposed to.

At the performance I saw, the larger issue was with the pacing onstage. The script is well-written with day-to-day scenes that seem natural and moments of humor and pathos. However, the pace of the scenes as performed seemed to drop noticeably at times, resulting in a loss of overall energy. An example is the scene where we meet Chick’s eccentric mother, Loretta (played by the very engaging Gladys Perkins). There is a rather realistic-sounding storm going on at the time (kudos to Kyra Wilbur on sound!), and the scene is an important one in that it both explains the title of the play, and is the point where the script takes a somewhat unexpected turn into religious mysticism. Unfortunately, while there is good interaction between the actors, the pacing seemed very uneven, lessening the overall power of the scene.

Despite the pacing issues, which I’m sure Salley and his cast will work to clean up as the run goes on, the actors do a great job bringing the playwright’s characters to life. Standouts are the three men (Salley, Labaze and Nowlin) and Ashlee’ James as Gale, who imbues her portrayal with humor and strength both of mind and character. I would be remiss if I did not also note the contribution of the youngest member of the cast, fifth grader Roodyanne Labaze, whose performance as Margaret skillfully combines both the annoying and endearing aspects of a cherished youngest child.

Overall, “Cracked” is a work with a great deal of heart: both from its creator, who reportedly based the character of Chick on his own grandfather, and from its cast who clearly have put much of their own into this project. Please take the time to go any enjoy their hard work while you still can.

Running Time: 70 minutes with no intermission.