Love in Ruins is the third Capital Fringe show written by playwright Paul Handy. Handy’s Cry for the Gods and and Carry a Big Stick appeared at the festival in 2011 and 2013 respectively. 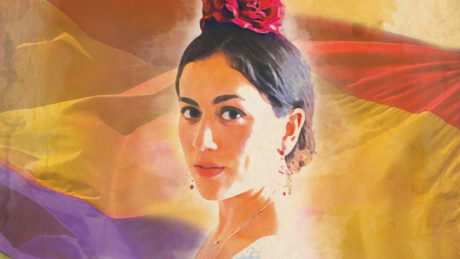 Handy would appear to specialize in historical plays, and he didn’t have to look far from home for inspiration for his latest play. In Handy’s words, Love in Ruins is “the true story of my in-laws (Mayte and Guillermo in the play), who met and fell in love in Valencia during the Spanish Civil War. They were truly survivors of all the deprivations that occurred during the war as Franco’s troops advanced slowly toward Valencia. This is a story of people surviving and seeking love when all conditions for love appear to be hopeless.”

Mayte and Guillermo meet in 1936, the first year of the Spanish Civil War. They come from two different worlds: Mayte is a liberal peasant, a student of literature and supporter of the Republicans while Guillermo is from the conservative upper crust of Spanish society, believes in order and tradition, and is a Franco supporter.

The cast was led by Thais Menendez as Mayte and Calvin McCullough as Guillermo. Both turned in solid, convincing performances. Daniel Santiago and Sheila Blanc rounded out the cast as Vicente and Josefina.

Calvin McCullough’s Guillermo experienced the most character growth as a man who starts out full of staunch convictions and must come to terms with change as the world falls apart around him.

Menendez played Mayte as a strong woman, able to handle whatever the world throws at her. The fact that Menendez is a bilingual English/Spanish speaker lent to the play’s authenticity.

Director Clare Shaffer paid great attention to detail in preparing the show. She spoke to the actual surviving “Guillermo” and several of the props onstage, including a Spanish Republican flag, were owned by the couple. The show involves numerous changes in locale (a library, a coffee shop, a bull ring and two homes) and Shafer impressively staged this with minimal props and without letting the changes be confusing or distracting to audiences.

Mark Platenberg’s music and sound design was a great asset to the show. We hear the crowd as the couple attends a bull fight and when Franco finally wrests control of Spain from the Republicans, it becomes a visceral moment onstage through an authentic sounding radio broadcast of a Franco speech (voiced in Spanish by Daniel Santiago).

Jessica Aimone deserves attention for the beautiful cover art she created for the show’s program which depicts the lovely Thais Menendez in traditional Spanish attire in front of the Spanish Republican flag.

I felt that Handy’s script could benefit from tightening up and enriching the dialogue. The story was entertaining but it plodded along at times and lacked a certain zing that one hopes would occur during moments of deep human connection.

That said, Love in Ruins is a very beautiful story and all the more so knowing that it was created by people with close ties to the fascinating lives it depicts.