It is rare that I start out a review with my closing assessment of a piece, but in this case, I will, assuming that word-of-mouth will quite rightly start spreading about this one and make tickets correspondingly difficult to get: You must see The Missing Peace. And no, the title is not misspelled. The Missing Piece is a one-woman sung-through musical about a young woman struggling to find her place in a world that does not want her, that considers her at best a disposable annoyance and at worst a threat, that is dying and drying up around the people and no one seems to care. 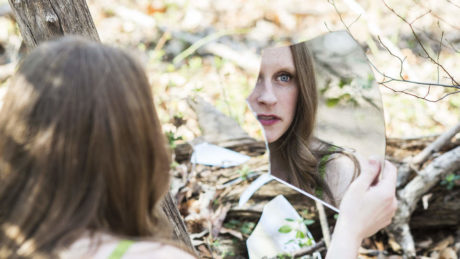 Written and composed by Ron Melrose in 1998, and for this production directed by Kelly Williams Carlson and music directed by Mandy Ferrier Roberts, the musical tells the story of Brianna, an inquisitive young girl kept sheltered by the patriarchal protection of her priest brother, Brian, and her imposing father, so that she does not end up like her absent mother, whom we eventually learn was banished from their land for being, like her daughter, too inquisitive and restless. The action takes place in a vaguely Celtic dystopian fantasy land slowly dying of drought, possibly hundreds of years ago, possibly centuries from now.

This is all explained to us by the Storyteller – one of at least six characters played by Christine DeMuth, including Brianna, Brian, a goat/woman crone, a dragon, and a ferryman – who appears at the top of the show pulling behind her a simple wooden chest on wheels, from which she pulls all of the props needed for the rest of the show, and then never leaves the stage again for over an hour. DeMuth has a beautiful and versatile voice that seamlessly carries her from character to character, often in the same song, so that the audience never has difficulty knowing who is addressing us at any given moment. From the moment the Storyteller asks to “Borrow Your Breath” to tell her story in the opening number, DeMuth draws the spectatators in close around the campfire.

Her stirring performance is particularly important here because of the few weaknesses of the story. Melrose reportedly wrote The Missing Piece while on sabbatical from writing, working as the music director for a church. He realized as he listened to the liturgical musical that it all involved the Holy Trinity of “the Father, the Son and the Holy Spirit” with no feminine presence at all. Therefore, he wrote this piece with the idea of including “the Mother” and “the Daughter” so that the Holy Family was a complete one. While this is an admirable goal and one at which Melrose largely succeeds, the presence of the men becomes ironically one-dimensional or even completely absent (we never meet Brianna’s father or even learn his name). All of the male characters are dismissive, threatening or frankly brutal.

In addition, the music, though a pleasing blend of contemporary Celtic and more traditional musical theater themes, is not terribly remarkable or innovative, with the possible exceptions of “In My Dream” and “The Spice of Fear” towards the middle of the story arc. That being said, the songs are lyrically gorgeous – multilayered and clever – and DeMuth simply sells what is in places a somewhat shaky plot with the power of her singing and acting. It is glorious, and it seemed the audience barely moved or breathed until the Storyteller gave them leave to “Take Back Your Breath”, packed up her chest and left the stage again.

For all that this is ostensibly a one-woman show, DeMuth is ably supported by the creative and production staff. Director Kelly Williams Carlson has clearly worked in depth with the actress in building each character as a separate, fully fleshed out being, so that even when more than one of them is occupying the same space, it is abundantly clear who is whom. Music Director Mandy Ferrier Roberts plays the keyboards and capably leads the rest of the four-piece ensemble: Karina Carter on woodwinds, Darcy Nair on percussion, and Kris Miller on violin. In addition, she interacts both overtly and covertly with DeMuth onstage so that they move fluidly from scene to scene. At times, Roberts becomes almost another character in the story as the two acknowledge one another through the fourth wall.

Costumes by Bethany Marx are simple but stunning. Each character has a single costume piece – Brian’s cowl, the crone’s wig with a single goat horn, the Storyteller’s cloak – that is distinctively theirs and signals which character is speaking. Lighting by Alexis Sheeks and sound design by Everett Simkins are beautifully incorporated into the overall production, and support the performance so seamlessly that you don’t always notice they are there…which here, is a good thing, as it allows the audience’s focus to stay on the performer.

Overall, The Missing Peace is one of those pieces that Fringe Festivals were designed to promote: unique, difficult to categorize and needing to be seen. Buy your tickets now.

Running time: 80 minutes with no intermission.

It should be noted that because the show takes place in the lower performance space, noise from the street outside, the courtyard of the Arts Center, and the lobby bar may be a distraction. Trigger warning for a graphic description of sexual violence.

Read the preview of ‘The Missing Peace.’