Normal/Magic is a diptych of two magical realism style stories, “Magic for Beginners”, written by Natalie Piegari and directed by Sam Mauceri and “Normal Sea,” where Sam Mauceri slides over to the writing side, directed by Riley Bartlebaugh (that doesn’t technically include the charming, theatrical interlude where the company leans in and changes costumes and sets to a neat little ditty right before our eyes). Normal/Magic is being performed in A:9 in the basement of the MLK Memorial Library. It is a colorless room turned into rudimentary theater by the addition of some pipe and drape, a small stage, some technology, and a few chairs. The pretense of the fourth wall is already out the window and the space affords no luxuries, so it is nice to see a production embrace the theatrical possibilities of a room and letting it all hang out (given the themes of the stories, it seems like a philosophical choice as well). It is also nice to be reminded what can be done with four fixtures, three colors, and some Christmas lights, props to designer David Allison for that. 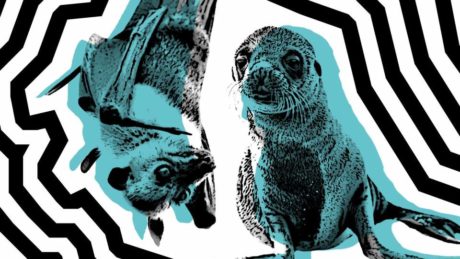 “Magic for Beginners” takes place in a basement (felt right at home in the basement of the MLK) as three teenage girls host an anti-prom, which for one of them, Harper, means casting a hex on the popular girl at school who won prom queen with the assistance of her friends, Jubilee and Darling (who really hates to be called that). The hex goes awry and Harper and Darling accidental channel a fruit bat into the body of their friend Jubilee. All three performers, Natalie Piegari, Jackie Madejski, and Sydney Lawson, have a nice chemistry that showcases the balance of the characters between angry irony, earnestness, and level-headedness. The light comic tone perfectly suits a wacky premise, though how a person channels a fruit bat exactly is a puzzle that the script never quite manages to solve.

“Normal Sea” tacks even harder into the magical realism vibe when gay couple, Erin (Sydney Lawson) and Lily (Natalie Piegari) discover that Lily of them is pregnant . . . with a sea lion. The crazy premise that lets the troupe explore, as the director’s note in their thoughtful program, what we gain or lose in the pursuit of normalcy. The piece is zanier than the one about teenaged girls and fruit bats, but the comedy is less evenly spaced. It accelerates toward the end, especially when a drunken Erin imagines her future sea lion child talking to her at a bar. The sea lion is a puppet voiced hilariously by Jackie Madejski (who does yeoman’s work as a jack of all parts in “Normal Sea”), while the first half of the play suffers from an attempt at being an earnest relationship drama while Erin struggles to grasp how anyone could have a sea lion baby. The play is so much better when the conflict over how to be normal moves to a place that embraces the crazy, instead of circling the drain of a kitchen sink drama. The sea lion baby plot device for exploring normalcy is a bit too thin until the end when it becomes is just crazy enough to work.

The Normal/Magic team doesn’t appear to be part of any theatre company or have founded one of their own just yet, but the company’s chemistry, earnestness, and collaborative dedication to exploring particular types of stories makes me hope that they will not be producing one offs, even ones as promising as Normal/Magic, for very long.