Poe, Times Two directed by DeLisa M. White and expertly written, adapted and acted by Playwright Greg Oliver Bodine, is a haunting double-dose of one-man plays based on two classic tales of horror by the great 19th Century horror and detective writer Edgar Allen Poe: “The Cask of Amontillado” and “The Black Cat.” Bodine expertly brought these two haunting classics off the dusty pages of the textbook and to vivid, breathing life on the stage. 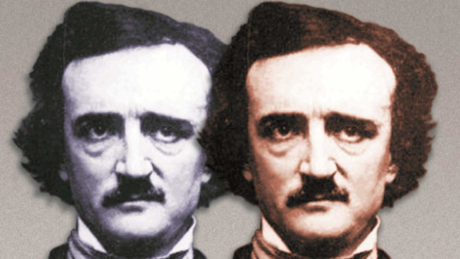 As part of this year’s Capital Fringe Festival, Poe, Times Two, gives us both these tales in the form of first-person narrations by Bodine. Both stories look into the minds of two murderers, one somewhat repentant, and the other not repentant at all.

As Montresor from “The Cask of Amontillado”, Bodine conjures a distinct haughtiness as a protagonist with a hatred for the uncouth merchant Fortunato (in Italian “The Fortunate One”). As the story opens, we see Montresor before a tribunal in the Prigioni Vecchi (State Inquisitor’s Room) in the Doge’s Palace in early 1820’s Venice, Italy. It is here that Montresor pleads his case in a murder inquest.

Montresor relates a tale of insults from arrogant, “back-stabbing”, self-appointed wine expert, and sometimes drunk, Fortunato. Montresor, though well-attired and mannered, proves beyond doubt to be a man who does not take insults lightly; for his family coat or arms reads: “no one wounds me with impunity.” His chief aim is to have his “pride and honor” restored after enduring several years of slights from Fortunato. Montresor seizes the opportunity for revenge during an encounter in which he meets the jester-clad Fortunato during a carnival.

At the end of a quest, through Montresor’s cellar and family catacombs, for a taste of the titular Amontillado wine, Fortunato (who proves anything but fortunate) meets an imagination-smashing, horrific fate that seems out of proportion to any crime he may have committed by thought or deed—a crime we never learn the nature of.

Does Montresor feel disgust or a bit of remorse over his punishment of Fortunato? On the contrary—he tells the tribunal that since his pride and honor has been restored, “I should be congratulated!” As the story nears its end, Bodine creates quite a horrific impact when we hear those infamous words from Montresor the murderer: “In pace requiescat!” (“May he rest in peace!”)

In quite a transformation from Montresor, Bodine becomes mild-mannered Alfred in “The Black Cat.” Here, Bodine plays a mentally unbalanced man, awaiting execution in a prison cell in mid-1800s New York. Alfred is reduced to reading the wall-etchings of past prisoners’ crimes. “What were your crimes? What went wrong?” he wonders.

Simmering underneath the story is Alfred’s unease with married, domestic life with his wife Cecelia, and several pets. We don’t learn much about Cecelia, except that as he “unburdens” his soul, he admits to using “intemperate language” with her.

“A series of household events” leads to Alfred being at odds with the titular “sagacious” feline, Pluto, who after the cat bites him, he gruesomely disfigures it. It gets worse; from there he grows disgusted with the cat and hangs it to death from a tree in his garden.

After buying another, similar looking cat, Alfred’s pattern of growing discontent leads to another killing, this time his wife.  Alfred attempts to cover up the crime, but this is fouled by the second feline in a much unexpected way.

Bodine absolutely crushed the role of Alfred. He showed Alfred’s sorrow, disgust, anger and the despair of a man on the eve of his execution with skill unparalleled. I was floored by how astoundingly great his performance was.

Sound Designer Charles Jeffreys created some of the most impressive effects I’ve heard this year, including, thunder, rain and a rat. I was impressed by Jeanette Aultz’s 19th Century suit she created for Montresor and ratty-looking prison garb for Alfred. Look for more excellent work from Director White and Co-Producer Catherine Aselford.