Motherhood is a difficult, complicated reality, whether it is as a new mother or comprehending your own mother. It is a special, and inexplicable relationship.

Robin Neveu Brown and Kevin Alan Brown have brought this abstraction to life in soft animal.hideous heart, a dance and physical theater production that incorporates storytelling, dance, music, and design. It is a personal story of family and clearly a labor of love for the couple, who served as its choreographers, composers, playwrights, creative minds, directors, and performers. 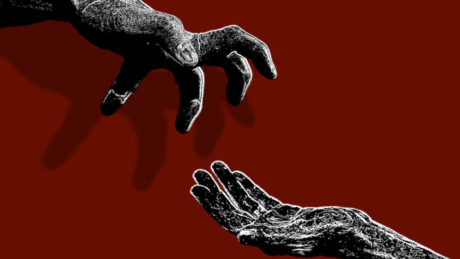 The performance is in two parts – the titular “soft animal” – a pause – and then “hideous heart”. Robin Neveu Brown is the “soft animal” of the first half, weaving, roaming, sweeping her way across the stage in a representation of her experience through pregnancy in becoming a first-time mother. She speaks to us throughout her movement, an abstraction ironically of the inexplicability of what it feels like and what it means to have a new life forged from you. We experience through her multi-form art nearly the entirety of her progress, up to and including the climax of her son’s birth and afterwards.

Just as when we think she completes her performance there, she brings out the ultimate surprise for us audience to see and hear – a glimpse into the physical, loving, real interaction between mother and son. The transition that follows is a window into the insular family life of the Brown’s, and an appropriate segue into the feature of Kevin Alan Brown.

It is a dichotomy of the greatest degree. Where “soft animal” was calm, full of peace, contentment, and warm, slow happiness, “hideous heart” is very markedly the opposite. Immediately an edgier, moodier, more chaotic atmosphere addressed with sound, attire, and the tempo of movement. He narrates, in the style reminiscent of stand-up, stories about his own mother, by all accounts a difficult and ill woman. His storytelling culminates in an explosive confrontation involving the deft integration of his personal encounter and Poe’s “The Tell-Tale Heart”, sharing the same sentiment of that inescapable, bursting reveal of that “hideous heart”.

The performance of both Robin and Kevin Brown, and their little guest, are true to the sentiments of each of their respective sections. They do a wonderful job on-stage individually as well as together, and much praise can be given to their joint collaboration in the writing, directing, editing, and overall creation of this peace. The sound editing, of all things, stood out to me in particular as being superb. Perhaps it is the starkness of the space, having no props, decorations, or distractions of any kind, that draws the eye so completely to the performer moving in front of you. The sound editing gives us that critical third dimension, stimulus for the ears, that completes the visual, and ultimately, the experience. It ranges from sound in the literal (carefully edited real-world clips of the birth of the Browns’ son) to sound as a mode of expressing inner turmoil (distorted static).

soft animal.hideous heart is a truly unique production – I cannot say I’ve quite seen anything like it before – that falls somewhere in that grey space between theater and dance. It is art that uses suggestion of the senses as a form to attempt to convey a fleeting, but honest picture of examples of what is family. I left impressed, not necessarily of any magnificence or soul-hallowing profoundness, but at the creativity of expression that soft animal.hideous heart embodies.