Samuel Beckett’s Waiting for Godot is a play that has both fascinated and confused audiences since the play first premiered in 1953. A production of the first act of Godot, directed by H. Bruce Funk, is being performed at the Martin Luther King, Jr. Memorial Library by Imperial Theatre Live,  as part of DC.’s Capital Fringe Festival. 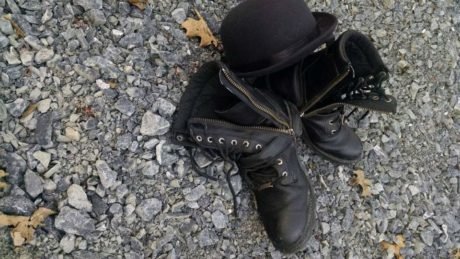 The title is quite literal. We have two men known as Vladimir (Raoul Anderson) and Estragon (Konstantine James) waiting on a road by a lonely tree for a gentleman known only as Godot. Part of the play’s intrigue is the mystery of who these two gentlemen are and their relationship to the elusive Godot. Other characters include the arrogant Pozzo (Aaron Selestok) and his slave Lucky (Peter Cooper), who stumble across the two. 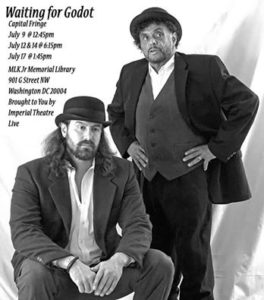 Irish literary critic Vivian Mercier in reviewing Waiting for Godot stated that Beckett “…had achieved a theoretical impossibility – a play in which nothing happens, that yet keeps audiences glued to their seats.” Godot, the character, never does show up to meet the two gentlemen. Therefore, the play consists of many philosophical (perhaps, absurdist) discussions between the characters. It’s hard to pinpoint what exactly the play is about, and yet, the play and the performance are very captivating.

The two leads (Anderson and James) give energetic performances as Vladimir and Estragon, despite some diction problems. The two highlights for me were the excellent performances of Selestok and Cooper. Selestok was appropriately quirky and flamboyant as Pozzo. Cooper’s role is mostly physical save for one nonsense soliloquy towards the end, but he works with the physicality very well.

If you do like interesting characters and dialogue, then check out Waiting for Godot at Capital Fringe.

Waiting for Godot plays through July 17, 2016 at the MLK Library – 901 G Street, NW, in Washington, DC. For more information and to purchase tickets, go to their Capital Fringe page.