Shakespeare can be difficult to keep up with, but maybe it’d be easier if there were hashtags and visual aids. In The 601 Theatre Company-presented play, 15 Villainous Fools, there is a flurry of characters, puppets, and modern-day references, all an adaptation of the Bard’s The Comedy of Errors. 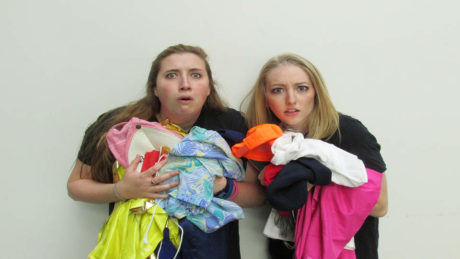 The Comedy of Errors is neither Shakespeare’s most popular play nor his most memorable, but with writing, choreographing, directing, and acting from Maggie Seymour and Olivia Atwood, one can’t help but wonder, why not?

The two actresses undertake the task to act as 15 different characters, ranging from sisters to nuns to an officer made of a tripod.  It can be difficult to keep track of the plot and which character is being played, but the comedy is what causes this play to succeed.

Throughout, the two actresses reference everything from Titanic to Dirty Dancing to Brexit. For even more fun, they involve the audience, not only speaking to them, but handing them props as well.

Sometimes, the scenes can become a little cheesy. In one, the stage manager, Axis Fuksman-Kumpa, repeatedly plays the incorrect song. The incorrect song choice occurs maybe five or six times, each time with Seymour and Atwood yowling at her for making the error, while at the same time — every time — knowing the exact choreography for the song. There are other instances when Fuksman-Kumpa corrects the two for making their own mistakes as well. Each mistake is, of course, on purpose and meant to illicit laughs.

The stage props are fairly simple with just four black boxes painted with words on each side, an effort to keep track of the scenes and characters seen. The play doesn’t need too many props, though. Many hats, definitely.

Otherwise, seeing the hilarity and chaos that is 15 Villainous Fools is worth the trip.