What Happened After the Party? Theatre Prometheus’ Good Kids by Naomi Iizuka at the Fringe

Theatre Prometheus is presenting a remarkable production of Naomi Iizuka’s Good Kids, which is inspired by the famous Steubenville, Ohio rape case of 2012. You should run to see this show. It is wonderful to see these talented young actors display such commitment and fire in their performances. 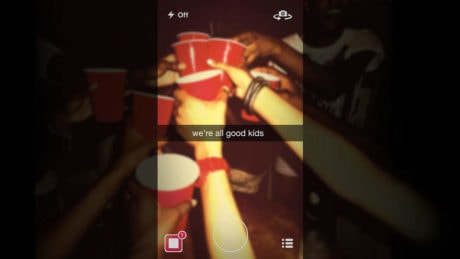 Direction by Lauren Patton is first-rate, and this play deserves a place in the forefront of the conversation about rape, privacy, and the social consequences of gender. It is the first work in a New Play Initiative established by the Big Ten Theatre Consortium, featuring plays by female playwrights.

The music is current; Cake by the Ocean, by Joe Jonas’ DNCE, Selena Gomez’ Kill Em With Kindness, for example. It sets the tone for the piece; fast-paced, sensual, and razor-sharp. Projections, on Facebook and other sites such as Vogue, TMZ, and Fashionista flash on and off, along with moving geometric patterns. Various celebrities are featured: “Chris Evans and Jenny Slate Are Dating”; “Orlando Bloom and Selena Gomez All Over Each Other in Vegas.”

The actors, all high school kids, enter and complain about the profound boredom they experience in a small town. Nothing to do. Nowhere to go. Nothing but (you guessed it) high school football. And as we all know, not everyone likes football.

The stately, sophisticated Amber, well played by Renea Brown, is the hostess of the party where all the trouble starts. A social leader in the group, she specifies; “no freaks, no losers, no randoms.” A party for her is a source of possibilities which don’t seem to exist in her everyday life.

Chloe, our victim and survivor, is a sensitive young woman who just happens to like having fun and drinking vodka. Dressed in a red top, short skirt, and killer heels, she rhapsodizes about the powerful feeling she enjoys after having a drink. As Ife Johnson portrays her, she is a riveting presence, emotionally honest and struggling to understand why the other girls treat her so badly. Her cousin Kylie (Hilary Kelly) is torn between loyalty and an inability to even acknowledge her relationship to Chloe. Kelly is very convincing in her desperation for acceptance, her ambivalence, and her pain.

Daphne (Grace Baker) attempts to understand her flamboyant friend Chloe, but tells her “You’ve been with a lot of guys.” Chloe tries to joke;  “Why is a guy like a dog? Because he’s always happy to see you and he never knows what he did wrong!”Brianna (Kelsey Murphy) twists her brown curls when mystified, and becomes something of a workaholic under pressure.  Along with Madison (Alexandra Bunger-Pool), who is the most aggressively mean of the troupe, Brianna forms a key part of the clique of “popular girls” who in some cases blame Chloe for her own downfall.  All of these women give fine, subtle performances.

Skyler (Diane Samuelson), dressed in pants with a long pony-tail, is the teenager who is shunned by everyone but gives as good as she gets. Her power as an actress is palpable when she confronts the boys, and her belief in herself and in what is right is heartening. Deirdre (Emily Kranking), the accomplished hacker, who is in a wheelchair, is played with depth and truthfulness.

Brendan McMahon is Connor, the football star, who naturally is held accountable for nothing, at least in the beginning. He resembles a young Jimmy Stewart, and to see him as a “bad guy” is unsettling, and, of course, perfect. Vince Boykins’ Landon has some sympathetic moments; when others are decrying Chloe’s outfit as tacky, he says “It’s kinda hot!”

Emmanuel Kyei-Baffour, as Tanner, is occasionally almost likeable, in the sense that he alone of the boys seems to have some sense of shame.  Smithchai Chutchainon is an excellent Ty, loud, defensive, and full of meretricious indignation.

Projections Designer Hope Villanueva’s work adds a whole new dimension to the production. Not only are there pictures which provide trenchant commentary on the action; such as Chloe’s shoes, forlornly abandoned during the attack. There are also messages from one character to another: Amber to Connor: You better be at my party. Kylie to Chloe: Please don’t wear anything trashy.  And of course the hashtags: #ItsNotRapeIfTheyrePassedOut; #DrunkGirlsAreEasy; and, worst of all, #DeadGirlWalking.

Lighting Design E-Hui Woo and Sound Design Robert Pike enhance the effectiveness of every aspect of the performance.

Signs of the times: a phone is now a camera, a texting tool, a source of connection and revelation. Live tweets. Facebook posts. Instagram filters.  Streaming videos online. There’s no such thing as dating, just “hooking up.” Whatever.

All the standard tropes of a rape scenario are here: “He says/she says”; “I think she was having a good time”; “my little Johnny/Mary Sue is a good kid”; “A part of me thinks they deserve what they get”; “It got out of hand.” And of course, there is that title: Good Kids. Were the characters in Lord of the Flies by William Golding all good kids? Obviously, a rapist cannot be a good kid. So why do we say it?

Good Kids is not to be missed!