In 2012 music artist Beck released a song book titled “Song Reader.” The book included sheet music for a collection of 20 songs. He hoped to create an album that could only be listened to by playing the music on an instrument yourself. A huge number of people have created their own versions of his songs, but no one had ever put them together as a collection. Harvey Droke, producer of Song Reader the Musical, wrote a libretto and Daniel Hornal added additional song arrangements to turn Beck’s original music into a rock opera. 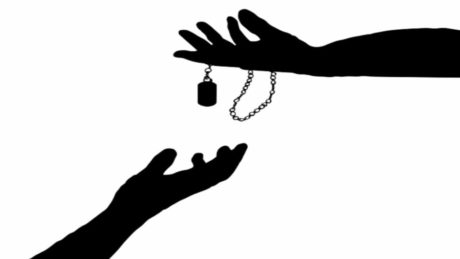 Beck’s music is melodic and often catchy and Droke has done a decent job creating a plot around the existing songs. A young and spineless soldier (Charles Tangires) visits a strip club where he is enchanted by exotic dancer Ziz (Christy Fischer). He sneaks into Ziz’s dressing room and they immediately fall in love. The next day the soldier leaves for war. While he is gone Ziz leaves her life as an exotic dancer. Meanwhile the soldier gets injured in battle and struggles with PTSD. By the time Ziz and the soldier are reunited they have both changed drastically, and must struggle to find common ground.

Song Reader is in its early stages of development, and because of this there are still many kinks to work out. The plot suffers from lack of believability. The soldier is introduced as a passive and shy character, but within a few lines he has convinced the guarded Ziz that she is the love of his life.

Many important moments are skimmed over, and I felt little emotional connection to the events of the show as a result. Effective transitions are virtually nonexistent, and in-between scenes actors awkwardly shuffle and ad-lib until the next orchestration begins. During the action of the show Director Clare Shaffer’s blocking is either static and awkward or there is way too much going on. While the stripper chorus performs Patrick M. Doneghy’s choreography with some energy, the soldiers do several choreographed marching routines that are extremely unenthusiastic.

There are some standouts in the cast including Christy Fischer as Ziz, whose sweet voice carries a majority of the show; Amy Maniscalo as Whorenet, who is peppy and consistently hits all the high notes; and Taylor Witt as the Pervert, whose commitment to characterization is refreshing. Russell (Larcen), Charles Tangires (Soldier), and Chani Wereley (the bouncer) also give admirable performances.

The set design by Jonathan Dahm Robertson consists of two simple black sheer curtains, two chairs, and a ladder. Though a bit simplistic for the scale of musical that is being attempted, it works adequately for a Fringe production.

Colin Dieck uses lighting to indicate mood and changes in location. Joan Lawrence has put together a huge amount of costumes, and the bright and colorful costumes of the zoo scene are particularly appealing. As a nice finishing tough Harvey Droke leads a live band consisting of Barbara Wilkinson, Anna Riehle, Jeanni Farnsworth, and Marque Nelson.

Clandestine Arts has created the exciting beginnings of Song Reader the Musical. The production held my attention and provided an enjoyable evening of theatre. New musicals are complex and need time and audience response to develop, and it’s always fun to see a work in progress.