If Shakespeare is your bag, Timon 2016 will be just what you are looking for, but with a modern air. Directed and adapted by Katie Wanshura, this play is an adaptation of William Shakespeare’s Timon of Athens. It would help to know before you set out to see this production that you are going to hear the Bard’s classical language and all that entails. Shakespeare brings such beauty to the English language that one can just sit and listen to the dialogue without really understanding what he’s hearing. And alas, there’s the rub. Better to check out a good synopsis before you go see this one. 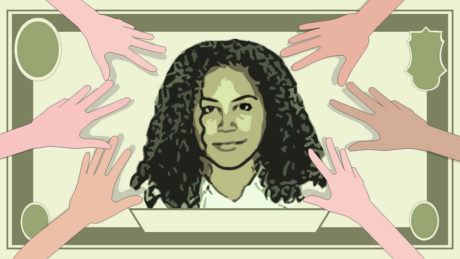 Timon 2016 recreates Shakespeare’s 16th century tale about a man who is generous with friends and flatterers to a fault only to have his penchant for giving meet with ingratitude when he needs their help. It’s a story about ingratitude and the repercussion of bitterness when giving does not result in receiving.

The Off the Quill (OQT) theatre company adapted the classical text of Shakespeare’s Timon of Athens making the setting presidential elections in Washington, DC. There were no references to Hillary and last time I checked, her campaign coffers were full. But if Hillary were to meet the fate of Timon, her funding would be in deep trouble! So much for the similarities, but politicos will be politicos, so perhaps there’s a thread of stinginess somewhere that’s true to form.

The play opens with a light dance routine and silent movie era video reels and music a la Lilian Gish setting high school as the timeline when Timon began giving her goodies away to flattering friends and other sycophants. Thus began Timon’s descent into becoming a woman who gives too much. True to Shakespeare, there’s always a story within a story and characters playing multiple roles. Fast forward to the story of Alcibiades (Boneza Hanchock), a friend of Timon’s who also becomes disillusioned with the status quo when her partner, a combat veteran, is sentenced to death for killing a man in a state of rage. Alcibiades joins Timon in her bitterness toward false friends who take your money and then desert you when you need them.

Off the Quill is a local non-profit theatre based in the DC metro area with a mission for storytelling using a blend of the performing arts and nonverbal communication. The full proscenium stage of the Elstad Auditorium at Gallaudet University was great space to creatively combine classical acting using modern technology via video clips, taped music (Scott Joplin, from a bygone era), mime and dance to tell Timon’s sad tale.

Whether Timon 2016 attempted to send a message about problems with our current system of campaign financing, or partisan politics and its current lack of generosity in reaching across the aisle was not completely clear. You are left to your own creative imagination to make the connection between Athens and DC.

Tamieka Chavis plays the title role of Timon, the presidential candidate who runs out of money after having been an honest philanthropist who always helped her constituents and fellow politicos. No one comes to her rescue in return when she runs out of money and asks them for support. She winds up living on the street in DC maybe somewhere near what might have been the old “Stop Wall Street” homeless hangout near McPherson Square.

The connection with Washington DC “senators” and the Establishment that Timon and Alcibiades set out to destroy, somehow, does not feel like politicians on the Hill. The tonal language of classical text makes such an impact, that it was difficult for me to feel that I was anywhere but back in the days of William Shakespeare. Yes, we were supposed to see Timon through the lense of a 2016 electoral campaign but the Bard claimed it. Shakespearean language is a force unto itself and I couldn’t shake the 16th century out of my head while watching Timon 2016.

A fine cast of eleven actors, many of whom are classically trained deserve an A for effort. Tackling Shakespeare is a grand feat at any rate, and the cast did a fine job. Tamieka Chavis deserves a standing ovation. Classically trained at the National Conservatory of the Dramatic Arts, Tamieka is a gifted actor who could make anyone love Shakespeare without their ever understanding a single line.

If you are planning to check out a production by Off the Quill, make sure you know whether or not it is a Shakespearean adaptation as OTQ frequently presents the classics in modern garb. Again, a good synopsis will come in handy and the OTQ will likely do a fine job of handling the rest.

Running Time: 90 minutes, with no intermission