She’s been described as a stand-up comic, a multilingual humorist, a playwright and a director.

But mostly CJ, as she likes to be called, is a master storyteller whose ability to laugh at herself—and those around her—makes The Human Algorithm one of the most popular solo performances at this year’s Capital Fringe Festival. 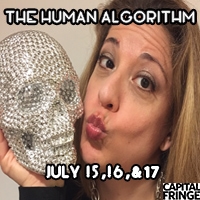 CJ is a regular at the Fringe and her shows are generally sold out.

That’s not suprising, since The Human Algorithm is wonderfully entertaining. It is also more human, in its often riotous look at common foibles, than it is any kind of algorithm.

In fact, the “algorithm” of this production is simply a structure on which to hang a dozen comic skits. These combine some hilarious tales of CJ’s Turkish-American family with a few poignant reminders of the human condition and contemporary politics.

One of her funniest stories—told at different points in the monologue—concerns her adventures buying a blue-faced Muppet Princess which she is then forced to carry, on her back, to a reception for the Turkish president.

Other stories range from a slightly scatalogical account of collecting urine samples from dogs to her recollection of a reunion where all her classmates are preternaturally thin. (To impress them—and us—she demonstrates her prowess at a yoga class.)

There are also tales about various uncles—one a soccer fanatic and the other a religious zealot—and an account of her mother’s encounter with a lion in downtown Istanbul.

My favorite riff is about her penchant, years back, for keeping open bottles of booze on the set. Unfortunately, the Fringe administrators cracked down and added “no alchohol” to her contract.

It’s a shame, because this is the kind of show that would benefit from a bit of bourbon or a splash of champagne. My solution would be to move the entire production to a cabaret-style bar, of which there are plenty in the H Street area.

Apart from a shift in location, I would suggest cutting some of the extraneous bits—notably a photo album, in which the snapshots are not as funny as the stories, and a chart depicting the four components of the algorithm (despite the fact that the chart cost $75 and was a bitch getting onto the airplane)—since they both take away from the humor of the performance.

CJ’s abundant talent as a storyteller is enough to rule the stage. Cutting the “extras” would mean a 60-minute performance and non-stop laughter, which is not a bad combination.