In keeping with the theme of several shows in this year’s festival, Philadelphia-based SHARP Dance Company’s Seven Windows is another piece focusing on the power of dreams, death, and reincarnation. Featuring original choreography by Diane Sharp-Nachsin and Kevin Ferguson, Seven Windows combines dance with original paintings by artists worldwide to tell the story of a dancer who dreams of a visit from her mother who has recently died. 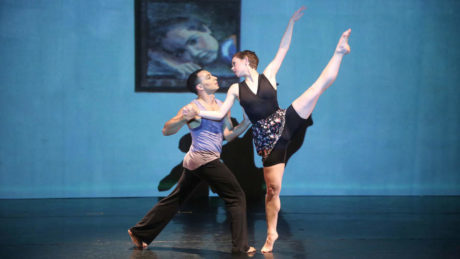 The piece features ten vignettes, some with solo dancers and some with the full company of six (Caroline Butcher, Sandra Davis, Kate Rast, Angeli Romano, Miguel Quinones, and Leslie Ann Pike). The seven windows of the title set the scene for the rest of the story, which, while beautifully choreographed and performed, makes for a plot that was rather unclear in spite of the written synopsis. I noticed several recurring physical motifs across all the stories, which don’t seem to suggest a single dream about one person’s mother as much as represent the lingering need to reach out for things, to remember, to lash out amongst the chaos of loss.

The minimalist set and costumes put the dancers at the forefront, with the artwork projected across a scrim by Lauren Mandilian-Huot. The varying music choices are excellent, and also include two original poems recited in voiceover. Sandra Davis appears to be the dancer having the dream, as she is surrounded and pulled to and fro through several of the vignettes, and has one particularly interesting solo en pointe while wearing a straitjacket from which she frees herself.

Another set of quite lovely pieces, which I found the most interesting, also include Davis and Kate Rast swinging from first a metal cube, and then a hoop, both suspended from the ceiling; they sharing some beautiful moments here, and their strength is admirable, as they are otherwise unsupported.

The cube and hoop did cause a few awkward moments of dead air while they were being raised, lowered, and secured, but the changes are otherwise smooth. There is also a wonderful closing piece set on a roller coaster, which doesn’t really make sense with the rest of the stories but added a pop of bright color and fun to an otherwise very somber set of performances.

Overall, the work is interesting and engaging, and makes for a decently full hour (including an approximately 10-minute intermission). With only three shows left this is a very short run, even for Fringe, only running through the end of this weekend (and the space is air conditioned!). While it does have a few kinks to iron out, definitely try and catch it if you’re a fan of contemporary dance or physical theatre.

Running Time: 60 minutes, with one intermission.