Romanov, at Flashpoint Mead Theatre Lab, is a show that will pull you in different directions, musically (electro-pop opera?) and emotionally (did wrong or done wrong?)—and leave you sitting straight up. Staring at a dark and nearly empty stage as you find your seat (true to Fringe aesthetics and economics, it’s minimalist: a blond wood Windsor-style “throne” is centered behind two tall floor mikes, illuminated by ceiling spots; a third, at stage right, is obscured), we are welcomed by a heavily miked announcer who exuberantly introduces each performer for a flamboyant bow. This, he tells us, is the first stop—which you, yes you, have been chosen to see!—on the Romanovs’ long-awaited world tour. 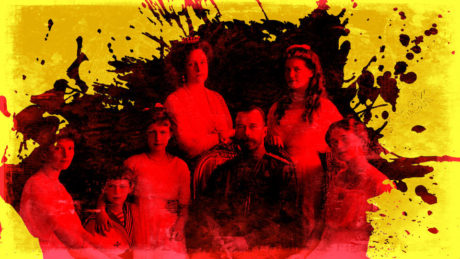 The—who? Aren’t they, er, dead? Let’s be realistic: Resurrection in politics is even older than the Romanovs.  (And shows no signs of losing its potency or attraction.) Grand Duchesses Olga, Tatiana, Maria, Anastasia, and their little brother, Tsarevitch Alexei Romanov, who were murdered with their parents, Tsar Nicholas II and Tsarina Alexandra, in a dark Russian cellar nearly a century ago, and written off by many as spoiled, privileged rich kids who feasted while their fellow citizens starved, are back to claim what was taken from them: a chance at vindication.

A chance to tell their own story.

We know from the opening number, “We Are Russia,” a declamatory electro-pop quintet, that the siblings may not always feel that they’re in harmony, but that when all’s said and done, they will find a way to reach it.  It falls to Anastasia, the youngest, to begin the story—“A dynasty of Russ; a dynasty of us”—in “Dynasty,” a rousing anthem in which her siblings provide stirring, full-throated support. As Anastasia, Allie O’Donnell is perky, sassy and sexy, her ribbing sometimes slipping into insult; as imaginative as the musical is, there is documentation to back this up. The real Anastasia was said to have sometimes “tripped people who walked by, teased others or caused a scene with her dramatics,” and to have been “lively, mischievous, and a gifted actress” whose “sharp, witty remarks sometimes hit sensitive spots.”  O’Donnell nails it.

As Alexei, Danny Baird (who also choreographed, composed the songs, and co-wrote the musical), tall, blond and slender, is a rap-and-slam poet whose labyrinthine verse riffs on everything from Daedalus to Disney, yet which flies off his tongue with the swiftness of fingers scrambling across a Snapchat screen. Alexei, the sole male sibling who was, in the patriarchal society in which they lived, the family’s last hope, as a hemophiliac (having inherited it through his mother’s line, via Queen Victoria) instead became the last of “a generation of male heirs who die of paper cuts.”  (“One way to stop the patriarchy,” he sings, seeming to perversely enjoy the black humor of it.)

His powerful, anguished Hemophilia is made even more dramatic by being sung against images of an imperial crown and home movies of the Romanov children, combining and alternating with jagged electrical waves, on a large screen behind the set.  (The images, projected and selected by Kelly Colburn, will be a constant presence, illustrating and at times enhancing the characters’ verbal and musical narrative.)

As Tatiana, Alicia Osborn is true to her historical description (“Tatiana was practical and had a natural talent for leadership,” one source advises), remaining cool, calm, and decisive in the face of her siblings’ petty squabbles.  Osborn also demonstrates a compelling voice, her top notes exhibiting a dramatic richness in the heartbreaking “The Next Room.” As Marie, Director and Co-Author/lyricist Meghan Stanton captures the easygoing, smiling middle child who history tells us was nicknamed “The Amiable Baby” for “her good nature,” while also showing us the depths that may have lain beneath. In “Tsarskoe Selo,” she sings of the family’s cherished “country home” with a gentle warmth and melancholy: “Time flies,” she observes; “childhood dies.”

Catherine Purcell brings a quiet sureness to the role of Olga, the eldest daughter, whose religious faith is her rock and anchor, but which leads her to follow the so-called “Mad Monk,” Grigori Rasputin. In the powerful “Rasputin & Revolution,” she implores God to help them, her voice reaching soaring, operatic heights. Her simple, strong faith as shown here is borne out by historical fact:  In a letter sent from the house where they were placed before the final one in Ipatiev, Olga wrote: “Father asks to … remember that the evil which is now in the world will become yet more powerful, and that it is not evil which conquers evil, but only love …”

Something they would not live to see, and which Stanton and Baird, in the characters they have written and portrayed, spell out for us in no uncertain terms. Electro-pop, hip-hop or opera? Did wrong, or done wrong? Tragedy, or comedy? Whichever side you come down on, you may well be sitting erect, as the sounds and images of Romanov argue amongst themselves for primacy. Like sisters . . . and brother.