This one is a total slam-dunk. Kudos belong to everyone in every arena of theater with The Music Man at Delaware’s Candlelight Theatre. Under the direction of Peter John Rios, the sets, costumes sound, staging, and performances are all first-rate. 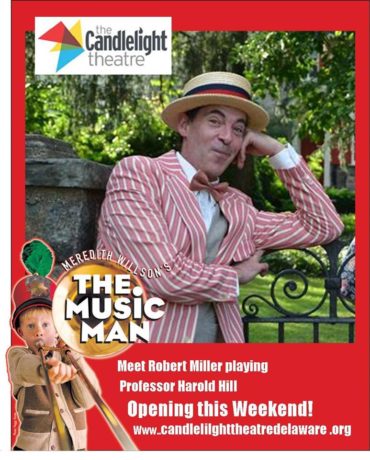 Musical theater cynics, like me, tend to remember The Music Man as the show that beat West Side Story for the Tony and Grammy Awards of 1957. But seeing it again, one is struck by how innovative Meredith Willson’ creation really is. A piano exercise turns into the first romantic ballad, a simple waltz that later appears, unrecognizably as the up tempo march “76 Trombones.” The era of Mid America of 1912 is cleverly evoked with barbershop harmonies that sound like the real thing. Most amazing, in this day of Hamilton, are the near rapping rhymes of “Rock Island” and “Trouble” which suddenly sound fresh, and up to date!

Director Rios, has assembled the perfect collaborators for this project.  Set designer Jeff Reim has a small stage to work with, but manages to perfectly evoke the trellis and ivy feel of an Iowa small town of the period. Mark Clapp’s quick change lighting keeps the action charm filled, while costumer Reba Ferdman completes the eye candy with beautiful period accurate dresses and suites. Every character seems to have four remarkable costumes. These petticoats and feather hats are put to full use in Jody Anderson’s expert choreography that entirely evokes the style of both the small town era and the Golden Age of Broadway.

But wait, there’s more! The nostalgia is totally enhanced by the wig and hair styles of Lisa Miller Challenger, and the make up designs, (moustaches and beards) of Claton Stacey. The orchestra is recorded but somehow sound designer Dennis Mahoney manages to blend it all into excellence.

The cast is first-rate. Bob Miller is the title character, Harold Hill.  Hill is an experienced con man pretending to be a music professor who sells a gullible small burgh the equipment of a marching band. He then plans to skip town with the money before a note is played. Miller clearly articulates the complex “rap” singing, and manages to be charming and energetic, but a con man nonetheless. He meets the uptight Marion the Librarian, who distrusts everyone. Each manages to discover the good in the other as they blossom into a believable romantic couple. Lauren Krigel is very appealing in the role, looks great in the many costumes, and presents a melting soprano in “Till There Was You.”

The tiny-minded citizens of Iowa are marvelous roles for performers or all ages. The older crowd is hilarious, led by Barry Gomolka, and Jennifer Newman as the Mayor and his wife. The teenagers are great dancers with Sarah Cheatham and Daniel Irwin as Zaneeta and Tommy. The children are a lovable bunch led by Aidan Brito and Samantha Deutsche as Winthrop and Amaryllis. Rosemary Benson is splendid as Mrs. Paroo as are the quartet and the Pickalittle Ladies. The only dislikable character, a competing salesman, is appropriately cringe worthy as played by Taylor Darden. The entire company scores in the terrifically danced “Shipoopi.”

If, somehow, you’ve never seen Music Man, hurry to Candlelight to catch this one. If you’ve seen it and the movie many times, you will find this production top-notch in every department.