The scene is deceptively simple. It’s winter. Two old men—one shivering in a sweater, the other swaddled in layers of coats and hats—are sitting on a park bench, contemplating the emptiness of what’s left of their lives. 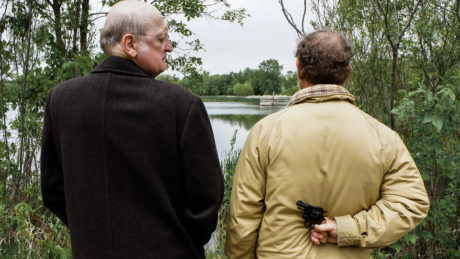 Is life, they ask—this kind of life, without human connections or hope for the future—worth holding onto?

That’s the issue, and Charlie, the boisterous half of this very odd couple, is debating Max, the more intellectual and articulate one, about the little they have.

Charlie has a wife who’s been hospitalized for 34 years and rarely even knows who he is. When she does recognize him, it’s not much better.  (When he tells her he’s going blind, she responds by saying, ‘That’s nice, Charlie.’)

Max, on the other hand, has never been married.

But both have memories. And Charlie can laugh. He revels in the thought of two young lovers nearby, embracing in the cold. And he’s glad to have found a home in an old SRO—short for  Single Room Occupancy–hotel.  He can even laugh at the memory of his father beating him.

Max, who once adored his father, cannot.

Whisper Into My Good Ear is a beautifully wrought one-act play by William Hanley.  First produced Off Broadway in 1962, it won the Drama Critics’ Award the following year and has been a staple of acting classes every since.  Yet it is rarely produced on stage, perhaps because it’s so difficult to do it well.

That’s hardly the case in this production, where Patrick O’Brien and Larry Ripp—two veterans of theatre who’ve worked together for 35 years—are able to bring new life to this funny contemplation of death.

O’Brien plays the role of Max in a comically morose fashion. Although best-known to audiences for his work in television (he’s been a regular on Monk, The Gilmore Girls, CSI and the West Wing) and film (The Curious Case of Benjamin Button and Catch Me If You Can, among others), he is also a fixture of many Fringe festivals around the world.

The blustering Charlie—who keeps squinting to see what the lovers are up to—is played with a combination of ribald humor and unexpected sweetness by Ripp, who is the founder and producer of Vintage Players, a stage company in the Minneapolis-St.Paul area.

Whisper Into My Good Ear is performed back-to-back with Underneath the Lintel, a dazzling solo production by Pat O’Brien, at the MLK Memorial Library at this year’s Capital Fringe.