S. Ann Johnson’s Double X—an exquisitely crafted choreopoem exploring the multicultural distinctions and connections among seven women—had its DC debut Saturday after appearances in Baltimore, New York, and Philadelphia. In a review of the Baltimore production two years ago (when the play was titled XX Chromosome Genome Project and directed by the playwright), DCMetroTheaterArts writer ZSun-Nee Matema called it “a sensuous, riveting tale of women on the brink of self-acceptance and emancipation” and “a story with energy, joy, and soul.” And that it surely is.

Johnson’s script is an eloquent sequence of first-person and collective testimonies, with some choreographic and musical interludes. In performance the text becomes a complete dramatic experience, not unlike Ntozake Shange’s choreopoem for colored girls who have considered suicide when the rainbow is enuf, which Johnson has said inspired her. That influence shines through. As was unmistakable during the matinee talkback I attended, the audience engaged with and identified with the seven women’s voices just as I saw happen during Theater Alliance’s recent production of for colored girls. 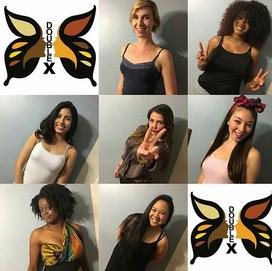 Shange had her rainbow of women wear dresses of different colors, and that distinction by  appearance serves her play well. But Johnson’s delineation of her women’s various voices by flavor makes a deeper dramaturgical statement, expressing  who her women are from inside and thereby reflecting an intersectional insight that unites them.

The program listed 28 different titles of poems, but as performed they flow into one another seamlessly, almost free-associationally. At the beginning there are passages about self-image and resisting objectifying social pressures (“I‘m reclaiming the control media has held on me,” says one.) The choreopoem then seques into an evocation of the exhilaration of falling love….

…and the pain of being betrayed…

I dumped you in the dumpster but somehow I feel discarded.
Brokenhearted.
My health, my heart, you disregarded.
And who‘d have thought it?
All but me.

The poetic text keeps sparking spirited images in the mind as the actor/dancers lend it emotional resonance with their voices and bodies. Throughout, the play’s personal is implicitly political, but near the end, in explicit references to the civil rights movement, the play’s political convictions come passionately to the fore. It is in that context that the playwright gives the European American character (Vanilla) a speech whose nerve seemed to leap off the  stage:

I did not kill your relatives or erase your memoirs, your history.
So, don’t you dare point your finger at me….
You look at me as if at night I torch crosses
And travel incognito behind a pointed white mask.
When I speak of inequality you seem to disbelieve
That I walked alongside civil rights leaders
Not just for you, but for me….
I am more than the oppressor.
You are more than the oppressed.
Let us learn, live and love one another

Johnson co-produced with Naelis Ervin. Karis Lovechild composed the music. Costume Designer Jordan Matthews gave each actor’s basic-black garment a distinctive scarf, shall, wrap, hijab, or other piece of a similar fabric, thus showing at a glance the commonality underlying the characters’ distinctions.

S. Ann Johnson’s Double X is a profound and important reminder that diversity need not mean division—and that the harmony the world much needs may best be learned from people called women.