It is not easy to reinvent the wheel let alone attempt it, but that is exactly what the ambitious Annapolis Shakespeare Company has done, with generally fine results, in its fully staged reading of Lerner and Loewe’s classic musical My Fair Lady, based on George Bernard Shaw’s play Pygmalion.

With a cast of seven (James Carpenter, Renata Plecha, Rob McQuay, Brian Keith MacDonald, Olivia Ercolano, Tony Tsendeas, and Laura Rocklyn), two keyboards, a simple, but elegant palette of black and white costumes, a bare stage and minimal but effective choreography, Director Sally Boyett transports us to Edwardian London and puts the focus squarely where it should be, on Alan Lerner’s rich book and lyrics and Frederick Loewe’s glorious music.

And her cast dives in with a sense of play and urgency that allows you to see this, one of the all-time, great musicals, with fresh eyes. 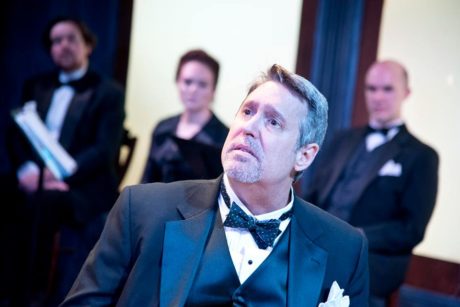 The cast is, on the whole, quite good, but for me, Olivia Ercolano as Eliza Doolittle, the cockney flower girl made a lady, and Tony Tsendeas, as her scheming father Alfred, shined so brightly. From the first lines of “Wouldn’t It Be Loverly?,” I was putty in Ms. Ercolano’s delicate porcelain hands.  Tsendeas was a treat in every scene, making a scoundrel both very funny and very endearing.

Boyett, in a pre-show announcement, told the audience that, as this was a reading, the actors only rehearsed for eight days. They performed with scripts in hand. I was quite impressed, given the short rehearsal period, but, obviously, some of it doesn’t quite work. Several of the relationships and characterizations aren’t nearly deep enough, most significantly the one between Higgins (Rob McQuay, who is in fine voice) and Eliza (Ercolano), and parts of the first and second act, lack clarity, for instance as the settings shift from place to place, such that you may feel a bit lost, especially if you don’t know the show.

But this is to be expected and it certainly won’t detract from your overall enjoyment of this lovely evening, because I think Boyett is on to something here and with more rehearsal and with the actors off-book, this chamber version, would make a fine addition to an upcoming Annapolis Shakespeare season. And wouldn’t that be loverly?

Running Time: Two hours and 10 minutes, with one 15-minute intermission.