In his program notes, Director Christopher Dwyer states there are good reasons why Shakespeare’s play have stood the test of time, and “one is that the stories are so rich and accessible,” and such is the case with Prince George’s Shakespeare in the Park’s 2016 Twelfth Night. This production is richly imagined, and performed by a diverse and talented cast whose command of the Bard’s language make the work accessible for audience members both young and old.

Shakespeare’s tale of shipwrecks, mistaken identity, and delightfully absurd love triangles is one of the best known of all his comedies. Viola, shipwrecked and orphaned (or so she believes), secures a position with Count Orsino, who pines for the Lady Olivia. She in turn, spurns his advances and succumbs to the charms of Cesario (Viola in disguise). Sebastian (Viola’s twin, long thought dead), appears to confound everyone. Confused? Not to worry, because thanks to Dwyer’s deft and creative direction you will be able to follow and untangle this jumbled love-knot.

As Orsino, Jack Novack broods for his lady-love, clueless to his newly-acquired servant’s affection for him. Jill Tighe is determined and plucky as Viola. Lillian Oben is terrific as Olivia, trying hard to achieve calm in the midst of her new-found love and failing miserably. As Sebastian, Kiernan McGowan deftly uses brawn and charm to elevate his fortunes.

Gregory Atkin is outstanding as Olivia’s pompous steward, Malvolio, especially when he’s duped into thinking that his employer, the Lady Olivia, loves him. His trio of tormentors include: A.J. Calbert as the forever-tipsy Sir Toby Belch; Daniel Riker as the fabulously foolish Sir Andrew; and Bess Kaye as the clever and witty maid, Maria.

Musicians, led by the puckish and charming clown Feste (Bradley Foster Smith), set the tone with a lively pre-show concert that often encouraged audience participation. Foster Smith set Shakespeare’s lyrics to his own musical compositions, and throughout the show his tuneful melodies and lively comedic performance added much to the overall production. His fellow musicians are also to be commended for their expert playing, as well as doing double duty as actors, particularly Phillip Webster as Fabian. 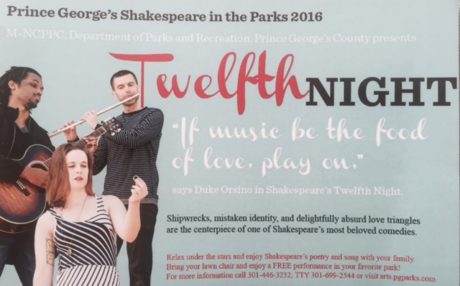 PG’s Shakespeare in the Parks, performs for FREE, traveling throughout Prince George’s County and surrounding areas in both outdoor and indoor venues. I had the privilege of being inside an air-conditioned auditorium on a hot Sunday afternoon, but I would gladly have sat on a sunny hillside in 90-degree weather to see a production of this caliber. Kudos to Prince George’s County Department of Parks and Recreation which underwrites the Shakespeare in the Parks program — may the funding never run out! And you should run to see Twelfth Night.

Twelfth Night ended its performances on July 17, 2016. For information on future events, go to their website. 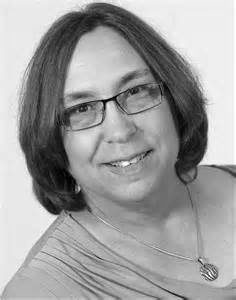 LAURA W. ANDRUSKI received her B.A. in Theatre/Communications from Rider University. An experienced arts administrator, her career spans several positions including Education Program Manager at Capital Repertory Theatre, Program Manager/Publicity Director for the Department of the Arts at Rensselaer Polytechnic Institute, and Associate Program Director for the ’62 Center for Theatre & Dance at Williams College. In addition to her administrative work, Laura is in-demand as a theatrical director for community and college theatrical productions. She is currently employed as the Theatre Program Coordinator for The Arts Barn in Gaithersburg, MD.