Joseph and the Amazing Technicolor Dreamcoat, with music by Andrew Lloyd Webber and lyrics by Tim Rice, is presented by New Millennium Production Company, a summer theater program of the Greater Egg Harbor Regional High School District. When I walked into the building, I instantly felt the excitement, and realized that a lot of effort went into the production by the teachers, students, musicians, designers, and directors. This labor of love was everywhere. 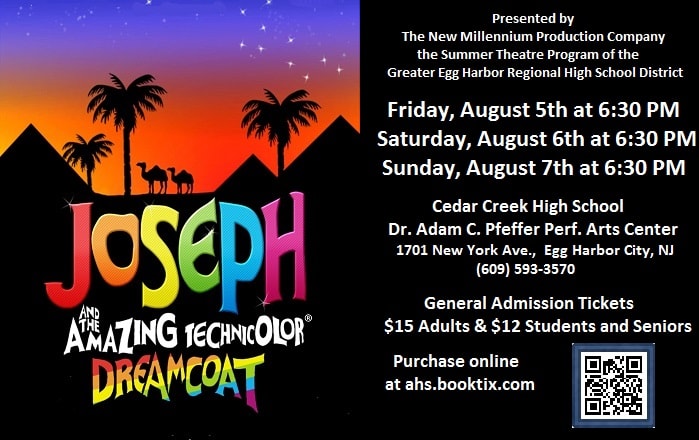 This production of Joseph… had not just one or two – but three directors. Absigami High School drama teacher Chip Garrison teamed up with Oakcrest High School drama director Kim Tunney and Cedar Creek drama director Matt Ballistreri to ensure that their students had a wonderful summer program, and that their talented cast members had a chance to shine. Each talented and enthusiastic member of the cast shined brightly.

The popular musical recounts the Old Testament story of Joseph, played by Absigami Junior Spencer Lyons, who was sold by his brothers into slavery, only to see his dream come true as he is made the head honcho of Egypt. It’s a staple Sunday School story that is told in a new and stunning way. Filled with humor and varying musical styles, the musical continues to dazzle audiences over and over.

I was very impressed by Spencer’s amazing performance. One moment he wassinging on his own on a bare stage, and the next time he was careening around the stage backed by a large chorus. There was barely a time when he was not onstage, but Spencer pulled it off like a veteran. His best acting moment came towards the end of “Who’s the Thief” where he was berating his brothers that he hasn’t seen since they sold him into slavery. He displayed fine vocals in “Any Dream Will Do” and “Close Every Door.”

Absegami Senior Miranda Muniz, Cedar Creek Senior Vanessa Matos, and Cedar Creek Sophomore Corrine Podolski took the stage in sparkling sequins and possessed amazing voices as they played The Narrators. They showed their vocal prowess in “The Prologue.,”Jacob and Sons,” and the many songs they appeared in. They were having so much fun that I couldn’t help but buckle up and go along for the ride.

There are several great ensemble groups in the Joseph Company. Of the group of boys and girls that made up Jacob’s brothers there were plenty of ‘theater hams.’ One whose energy most stood out to me was Corey Critelli, who played Reuben. From the moment I first heard him sing in “One More Angel in Heaven,” I knew he was not only a great singer, but a great comedian, a pretty good athlete and a tango dancer.

Coby Alavez is terrific as Pharoah. If he doesn’t make it on a professional stage someday – he is guaranteed to have a career as an Elvis impersonator. He started Act Two with a bang and kept it going. He had to make the audience believe that he had that Elvis look, charisma, and flair that made all the girls faint. And on top of that he had a voice fit for Graceland.

As I stated above, there are three directors used in this production. With over 40 teen actors performing on the stage, it makes sense why they needed three directors to organize the traffic during the show. This did pose some problems when some of the really funny bits in some of the musical numbers got swallowed up by the mass of people moving on the stage. And there were times when I couldn’t find the Narrators and/or had a difficult time figuring out what Pharaoh was doing during his scenes.

I really admired the directing during “Poor Poor Joseph.” In this scene, the brothers needed to smear blood on Joseph’s coat to make it look like he was dead. All of a sudden a young lady appeared dressed as the cutest lamb you ever saw. I loved the comedic timing as she nonchalantly walked by and was yanked into the circle of eleven brothers.

Kudos to Musical Director Brian Conover (of Galloway Township Middle School), and his nine-piece band, and to the students’ powerhouse voices. I was so impressed that the excellent musicians never drowned out the young singers. A perfect example was “Close Every Door,” where the band and the cast achieved perfect synergy. It began with Joseph all alone and then the Narrators came in and those voices blended with beautifully. It  gave me chills. And then the rest of their harmonies filled the entire house.

Kim Tunney teamed up with Ashley Winkler of William Davies Middle School to deliver some stellar choreography. The dancing filled the stage on every number and even spilled into the house itself. One of the best ensemble numbers was “Go, Go, Go Joseph,” the First Act closer, which had the entire company on its feet and jumping around. There were flips, splits, and so much pony trot and other favorites from the 80’s. The talented Joseph company was filled with some of the most energetic dancers, singers, and actors I’ve ever seen.

Chip Garrison spearheaded the design process of the minimal, elegant, and effective set. He went on to praise the work of students Kiley Arroyo, Grace Cluff, and Stephanie Emory, who put a lot of time in building and painting. The amazing sets were a true community effort. In the words of Co-Director Kim Tunney, “Everybody designed it.”

There was a white scrim on the back wall and in front of that was a black stair step platform bordered on the stage right and left with these three-sided set pieces that could turn to show changing locations and locales. Without a lot of effort and the minimal staging you could be as far away as Egypt or right back in Canaan. All an actor had to do was turn the big triangles around – and what used to be a wall with a pyramid painted on it – was now a palace column.

I most appreciated these set pieces in the number “Journey to Egypt,” where the pieces were turned one-by-one to show Joseph’s passage into Egypt.

Ashley Winkler’s colorful costumes were stunning. And the Dreamcoat was just as colorful and as gaudy as you would expect, and it really shined under the bright lights. I also enjoyed Pharaoh’s white and sparkly Elvis costume which was full of rhinestones and sequins. I’m sure the King would have been proud. Another nice touch was Joseph’s brothers’ flashy sneakers and their Cowboy hats seen in “One More Angel in Heaven.”

And what a finale! “Joseph Megamix” was a hilarious way to end the show. And it was so heartening watching the the talented cast basking in the power and joy of the performances they had just delivered.