Other Voices Theatre’s production of Anything Goes is nothing short of spectacular. Of course, the marriage of the legendary Cole Porter’s music and lyrics, the book by P.G. Wodehouse and Guy Bolton, and the efforts of a great director (Susan Thorton), dazzling set design (Lee Hebb), and breath-taking choreography (Donna Grim) make for a memorable evening of theater.

From the moment you enter the performance space, it’s obvious that this show is something special. Hebb’s set, featuring the deck of the SS American, is a lovingly recreated afterdeck of a large cruise ship. Every single expected nautical touch is evident, down to the entrance hall from the lobby to the theater. Painted bollards line the way, with an actual rope suspended between them.

As impressive a work as this set is (and it’s undeniably impressive), it’s the performers’ that bring this ocean crossing to life.

The ensemble in Anything Goes has as much talent as any ensemble working in a community theater show. In both voice and dance, this group literally leaves you breathless in the big production numbers (“Anything Goes,” “Blow, Gabriel, Blow,” and “Let’s Step Out”). Musical Director Lisa Dodson has put in some REAL work, and it shines onstage!

Regional veteran actor Samn Huffer is a joy to watch as Elisha J. Whitney, Wall Street tycoon and the constant victim of consuming one-too-many. Many of his entrances and exits involve the bar, to the comedic delight of the audience.

Jonas Dawson is a real hoot as Sir Evelyn Oakleigh, the wealthy English aristocrat who discovers his darker side midway through the voyage. Jonas has great comedic timing, and his costumes (designed and assembled by Samn Huffer and Kirk Bowers) are spot on. Watching Jonas shift his attention from his fiancée Hope Harcourt (played by the very talented Kaitlyn Lamkin) to evangelist/seductress Reno Sweeney (more later) is a joy to behold.

Shaina Freeman takes on the role of Bonnie, the hapless and lovable conspirator of public enemy #13 Moonface Martin, and storms the stage in her numbers like a beach-head assault. Gifted with a belter’s voice, Ms. Freeman makes Let’s Step Out stick in your head until you drive home from the Performing Arts Factory!

Beloved regional actor Lee Hebb’s portrayal of everyone’s favorite Broadway “criminal,” Moonface Martin, is the show-stealer. Lee’s rubber facial expressions, his frantic attempts to hide in plain sight and his exasperation at practically any and everything kept the audience laughing from his first entrance to his last. Trust me, the ticket price is covered by Mr. Hebb’s performance, everything else is a bonus. One hell of a bonus!

Adam Blackstock is perfectly cast as Billy Crocker, Elisha Whitney’s office manager. His costume changes, poorly designed efforts to conceal his identity, are perfectly executed. Adam pulls off a tough role with the skill and effortlessness of a Gene Kelly, he’s that good. A strong singing voice, smooth dance moves and a genuinely likable personality, Adam has us rooting for Billy to get his girl from the beginning.

That brings us to Reno Sweeney, played wonderfully by Taylor Whidden-Knapp. Part soft crooner, part big voice belter, Ms. Whidden-Knapp embodies the finger-snapping, hip-swinging persona of the occasional evangelist and constantly sexy nightclub singer. In the dance numbers with her angels, she keeps up step-for-step with her talented crew, in itself no small feat! For Anything Goes to work, Reno has to be a powerhouse. Taylor Whidden-Knapp is that powerhouse in this show.

Don’t let this ship leave port without you! 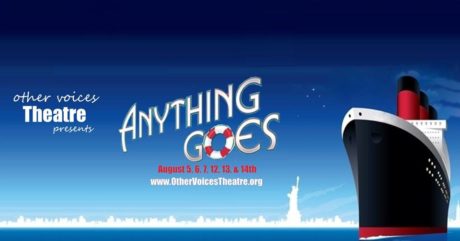 Anything Goes plays runs through August 14, 2016 at Other Voices Theatre performing at The Performing Arts Factory – 244 South Jefferson Street, in Frederick, Maryland. For tickets, purchase them at the box office or online.