You may ask yourself why anyone would want to see The Wizard of Oz one more time, especially a semi-professional theatrical production at a county rec center, when you can pick up the MGM movie classic at K-Mart or snatch it off the Internet in the comfort of your own boudoir.

That’s a gamble the plucky Zemfira Stage is taking with its summer offering, which opened Friday for a three-weekend run at the James Lee Community Center in Falls Church, VA.

If you absolutely love the sacrosanct 1939 film version—or even if you’ve come to hate it (“Are you a good witch or a bad witch?”)—you’ll find enough clever turns and comic twists to make it worthwhile to try one more trip down the Yellow Brick Road.

For one thing, this musical, based on the movie and L. Frank Baum’s original tale, is funnier and less sentimental than the film. The script was adapted in 1987 from the Judy Garland warhorse by Scottish playwright John Kane for the Royal Shakespeare Company.

It still contains those great iconic songs by Harold Arlen and E.Y. Harburg, along with the familiar characters, but they all have a more human touch: the Wicked Witch is a sadistic wise-cracker, the Cowardly Lion is sympathetic (didn’t you want to smack Bert Lahr upside the head in the movie?) and the Scarecrow is more humorously clueless than the Ray Bolger straw-man.

Allow me a disclaimer: I am friends of director Zina Bleck and stage manager Erin DeCaprio, but I’m hardly biased. I counseled against mounting such a well-known icon for reasons I’ve noted above, though having seen many successful Zemfira productions in the past (The Producers and Monty Python’s Spamalot at Zemfira Stage come immediately to mind), I should’ve had more faith.

Turns out, they’ve assembled a gorgeous and talented cast, a professional-quality orchestra, a wizard-worthy crew, and they’ve inserted some innovative elements and even a few tongue-in-cheek lines that got laughs on opening night that could not have been from the original script.

On top of all this, they have a dog.

Princess Prien plays Dorothy’s Toto like she was born to the stage. Okay, frankly, she looks like she hasn’t a notion of what’s going on around her: she just plays along with an infectious grin and an expressive tail, and seems to enjoy the attention from the crowd. But she’s an affecting addition to Zemfira’s enormous ensemble.

Confining praise to the principle cast members, as is customary in a short account, seems unfair in a case where everyone deserves a nod, but such is life outside the Emerald City.

Lucia LaNave brings a naïve charm to Dorothy Gale’s personality, which works well, as her Dorothy seems a bit more vulnerable than Garland’s.  LaNave had to contend with a nasty sound glitch Friday night, shooting static from her body microphone, but she powered through it like a pro with a show-stopping “Over the Rainbow,” and the crew fixed the crackle by intermission.

LaNave passes the baton next weekend to Anna Nowak, who will finish the run as Dorothy, and from her performances at rehearsal, she will competently fill the role.

Speaking of romantic leads, actor Jim Mitchell has done them all, with his profoundly powerful singing voice and commanding stage presence, including the French planter in South Pacific, the pompous professor of My Fair Lady and the king of Lion in Winter.

So it’s especially humorous to see him decked out in that absurd costume, playing the Cowardly Lion, ever with that rich singing voice as best displayed in “King of the Forest.” And judging from the laughs, Friday night’s audience must have thought so, too.

Meanwhile, Mitchell is also credited as the show’s Assistant Director.

Rene Kieth Flores lends his melodious singing to his portrayal of the Tinman, and manages some spirited dance steps, made especially tricky with the most elaborate costume in the show.

The entire production is given continuity by the versatile performances of Joe Nowak, who we first meet as Dorothy’s folksy Uncle Henry, then as the bombastic mayor of Emerald City, and finally as the harried palace guard who runs cover for the Wizard.

Larry Keeling is a formidable and likable Wizard, with a booming voice and a pleasingly slight drawl.

As pleasant as Keeling’s Wizard might be, Melanie Jennings-Bales is a perfect shrew, first as the nasty neighbor Almira Gulch, then exploding with high-pitched rage as the Wicked Witch of the West. What a witchy witch; yet she commands a few good laughs with her sarcastic insults.

In many ways, the biggest star of this stellar production is Stacy Crickmer, who plays Glinda, the Good Witch of the North, but who is also the show’s choreographer.

With the limited special-effects resources of a small theater troupe, Crickmer arranged a clever device: the cyclone and the Yellow Brick Road are anthropomorphized, with two dancers, who cavort about the stage at the appropriate moments in an effective ballet-portrayal of those magical elements.

Hayley Jessup and Lori Carter create the chaos of the twister and the guidance of the golden pathways with precision and expressiveness in their energetic pantomimes.

Crickmer’s performance as Glinda is as enjoyable as she was in her acclaimed turn as the Lady of the Lake in Zemfira’s zany Monty Python’s Spamalot.

In choreography, she was assisted by Jonathan Faircloth, who helped herd and corral a sizable ensemble that includes a slew of talented and energized children, together pulling off dance numbers shot through with humorous sight-gags and acrobatics.

Meanwhile, the players are decked out in colorful and elaborate costumes designed by Michelle Macdonald.

And those costume changes are miraculous. All the principle characters play more than one role, if you remember the story. Just getting in and out of that Tinman’s suit so actor Flores can reappear as farmhand Hickory, must have taken, well, wizardry. And it was pulled off with the magic of Make-up Artist Katy Chmura and Set Designer Natalie Foley.

It all comes together with a remarkable live orchestra, under the direction of Jack Dusek, which brings to life those memorable tunes that you may have trouble getting out of your head when you leave the theater: “Ding Dong! The Witch Is Dead,” “Follow the Yellow Brick Road” and “We’re Off to See the Wizard.”

It’s a musical ensemble and a well-matched cast that almost upstages that adorable dog.

I could conclude by saying “It’s a wonderful ‘Wizard of Oz’,” or “Follow the Yellow Brick Road to Fun,” etc., etc., but that would be cliché, even though it might be true.

Suffice it to say, this is a The Wizard of Oz that you should give a try; come for the show—stay for the dog.

The Wizard of Oz plays through August 21, 2016 at Zemfira Stage performing at James Lee Community Center –  2855 Annandale Road, in Falls Church, VA. For tickets email ZemfiraStage@gmail.com, call (703) 615-6626, or purchase them at the door with cash or a check. 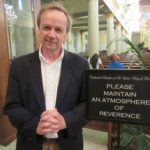 Leonard Hughes is a writer and journalist living in Hyattsville, Maryland  As theater critic and editor at The Washington Post, he reviewed theater and stand-up comedy and edited local news until his retirement in 2008. He continues to write and researches literature, and in his spare time, he manages and sells merchandise on the road for comedian Lewis Black, for whom he writes a travelogue on the entertainer’s Web site. Prior to working at The Post, Hughes was Arts and Entertainment Editor at the suburban Washington Journal newspapers. A graduate of the University of Maryland, he holds a Master’s Degree in literature.