Just when the US is in a political freefall, with Trump and Clinton battling it out, while Stein and Johnson are waiting in the wings, Playwright Andrew Marvel opens a Pandora’s box with Gay Republicans and non-Republicans going on a roller-coaster that has audiences in stitches.

The world premiere of My Favorite Husbands, directed by Quince Productions’ Executive Artistic Director Rich Rubin, opens this year’s Gayfest! 2016 in an entertaining, but also a thought-provoking, production at Studio X in Philadelphia.

I had the pleasure of interviewing Playwright Andrew Marvel.

Henrik: When was the first time, as a child or adolescent, that you discovered your love for theater?

Andrew: When I was a child, probably around 9 or 10, my sister, who lived in New York, took me to the St. James Theatre to see a revival of My Fair Lady. I was awestruck. It doesn’t get much gayer than that, does it?

When first did you realize that you liked writing? What was the driving force behind it?

In middle school we began getting assignments to write stories and then read them before the class. It was the only homework that I really enjoyed. I couldn’t wait to get home and start writing, and I’d stay up late writing, reading out loud to myself, and then rewriting. Then there was the huge gratification of reading the stories in class and hearing people laugh at all the spots I’d hoped they would. I think the driving force was a desire to connect to my classmates in a way that felt impossible in “real life.”

My Favorite Husbands sounds hilarious but also comes with a darker side. What was going on in your life before you wrote this play?

Who knows? I think the genesis may have come from my own mixed emotions about the huge leap forward the gay rights movement had made recently. The fact that the President of the United States would actually acknowledge the LGBT community in nationally televised speeches still amazes me. It makes me cry because it is not something I would have thought possible as a teenager. And of course it’s totally right, and long overdue.

I wonder what it must be like to be a gay adolescent today watching TV with your family and having that experience. At the same time though, I find myself uncomfortable watching how quickly the Gay community is being absorbed into the mainstream. Is that really where I want to be? And do I even have a choice any more? 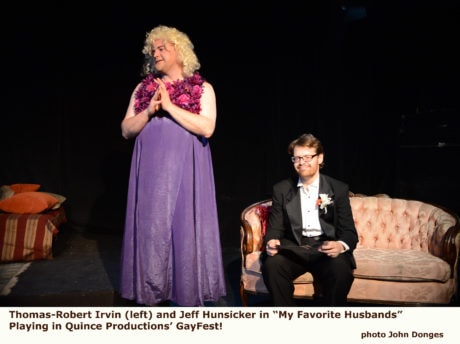 Gay marriage is a fairly new phenomenon in the United States. How did you and your family respond to the new marriage laws?

A straight nephew of mine alerted me via a congratulatory text to the news that gay marriage had been legalized in New York State. He was even more excited than I was, but I loved getting the text.

What did your personal life look like at the time?

I was single at the time Gay marriage was passed, and not just single, because that makes it sound like I was out dating, but more like on the sidelines—watching. I had a couple of long-term relationships when I was younger, but I think I had begun to see my future as being a “table for one.” Part of this perception was my lack of self-esteem as I “embraced” middle age. And basically, like Mark, I was afraid of intimacy.

However, as I grew older, a life without a partner/boyfriend/husband didn’t seem too horrific. Over the years I had accumulated a kind of gay family, many members of whom were also single, so I didn’t feel too out of sync. But now, the surge in the LGBT community to go mainstream via gay marriage seems to handcuff part of who I am, or who I would like to be. Somehow it feels limiting.

Your play is pretty vivid. What actually gave you the main idea for writing My Favorite Husbands?

A memory of a former roommate in my first New York apartment after college. His name was Mark, like the central character in the play. He told me a story: once, when an ex-boyfriend announced he was coming by to pick up the last of his belongings, Mark, having downed a Quaalude, decided to dress up in drag and greet his ex at the door.

That scenario could spell trouble.

Oh, it did. Not trouble, really, but a small explosion that was probably needed to clear the air. I’ve always remembered that story. It struck me that Mark was using drag as a weapon, a weapon to express feelings of hurt and anger that he couldn’t face on his own.

How would you describe Mark, your extroverted, larger-than-life, old-school-gay New Yorker?

Now in his 40’s, he is a former model and one time “it” boy of the Gay New York underground, still graced by fading good looks. Defiant in his views equating gay liberation as anti-establishment, he struggles to adapt to a changed world ushered to his doorstep through his current, younger boyfriend.

And who is that younger love interest?

Tristan is a 27-year-old Latino, a struggling, undocumented actor/artist and Mark’s boyfriend of almost two years. Street smart, self-assured, but craving legitimacy, he is determined to make his relationship with Mark work. Tristan appreciates Mark’s no-holds-barred approach to life. They are both fighters, but from very different generations.  Tristan also recognizes that there is a lot he can learn from Mark. By the end of the play it turns out the opposite is also true.

With all the quirky behavior of some characters, John, Mark’s former boyfriend of many years, seems pretty balanced.

He strives to be. John’s exterior is diplomatic and rational, but when cornered he tends toward hysteria. He embraces the new gay world order and wants to make the most of it. John’s taken a huge step in marrying this rightwing politician, whom he dearly loves. Like I imagine any person might feel on their wedding day, John vacillates between thinking he’s just done the best thing ever, or has just made a colossal mistake. He really needs reassurance, but it’s not forthcoming.

Tell us about Raul, the openly Gay Republican politician.

Raul is a Latino alpha male in his 30’s. From a privileged background, he has spent most of his life winning. John’s current partner, he was recently elected as an openly gay man to the New Jersey legislature on the Republican ticket. Hot headed and passionate, he believes he is changing the world for the better.

My Favorite Husbands has not only been nominated for a number of America’s most prestigious theater awards, but it is going to see its world premiere in the City of Brotherly Love during GayFest 2016, directed by Rich Rubin, the festival director and producing artistic director of Quince Productions himself.

My Favorite Husbands began as a 15-minute play entitled Bridal Shower, which was produced in New York City in the summer of 2013 at the Fresh Fruit Festival. During a month-long residency workshop awarded by HB Studios in New York City in July 2014, the piece was developed into a full-length play, renamed My Favorite Husbands. It was a semi-finalist in this year’s Eugene O’Neill Theatre Conference, as well as the Princess Grace Playwriting Fellowship Competition. After a series of readings in New York, it is now making its world premiere in Philadelphia as part of GayFest!

Would it be fair to say that you located My Favorite Husbands somewhere between tragedy and comedy, between a love story and a political play?

The play has a political context. However, it is also a love story between Mark and Tristan, and in a way, also between Mark and John, Mark’s ex-boyfriend. They are no longer romantically involved, but they are family. Gay family. But the wedding threatens this union. After a near rupture on all sides, the play ultimately brings everyone together.

Ever since the arrival of George W. Bush and Dick Cheney, and especially since Donald Trump entering the political arena, the term “Republican” has taken on whole new meanings. It’s against this background that quite a few people will probably raise an eyebrow when they hear about “gay weddings for Republicans.”

You know, it’s funny. When the shorter version was first performed in 2013, there was a feeling of “yes, this is about to happen. This is what’s around the corner.” Now, with the current climate, who knows? It certainly feels like the Republican platform has retrenched. But it seems to me that right now we are in a free-for-all. No one really knows where we’re headed.

Tell us more about how the satirical aspects of My Favorite Husbands play out.

Mark bristles at the very idea of a Republican gay wedding. So when an invitation arrives to celebrate the union of Mark’s ex-lover to an up-and-coming rightwing Latino politician—with names like Marco Rubio, Chris Christie, and even Donald Rumsfeld dotting the guest list—Mark reacts the way any “old school” homosexual might: he decides to go in full drag.

Molière most likely would have enjoyed your portrayal of some of those archetypal gay characters.

Ha! Well, thanks. Mark relishes the idea of disrupting what he deems to be a political showcase, but he gets much more than he bargained for. 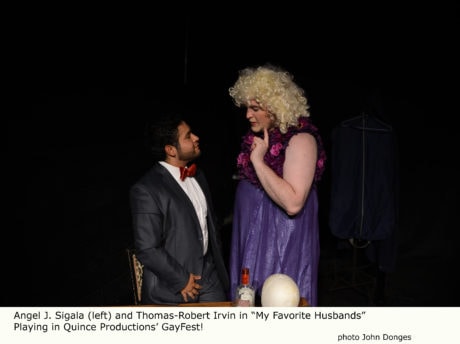 Ultimately, what was one of your main goals in writing this play?

My Favorite Husbands takes a comedic look at the effects mainstream acceptance is having on the gay community, as well as one man’s choice between simply growing old or finally growing up.

Would you be willing to share one thing with us that only your closest friends know?

I think Marco Rubio is kind of cute.

Both of my parents grew up in Philly, so this feels like a great place for the play to premiere. And I’m thrilled that Rich [Rubin], decided to put on My Favorite Husbands as part of GayFest! 2016. It’s a big risk to put on a new play, and he’s producing four of them this summer.

I’ve lived with these characters for years now. I can’t wait for them to leave the nest and fly on their own.

Bon voyage to that motley crew and happy landing at Philadelphia’s popular Studio X, the ideal place for cutting-edge theater. 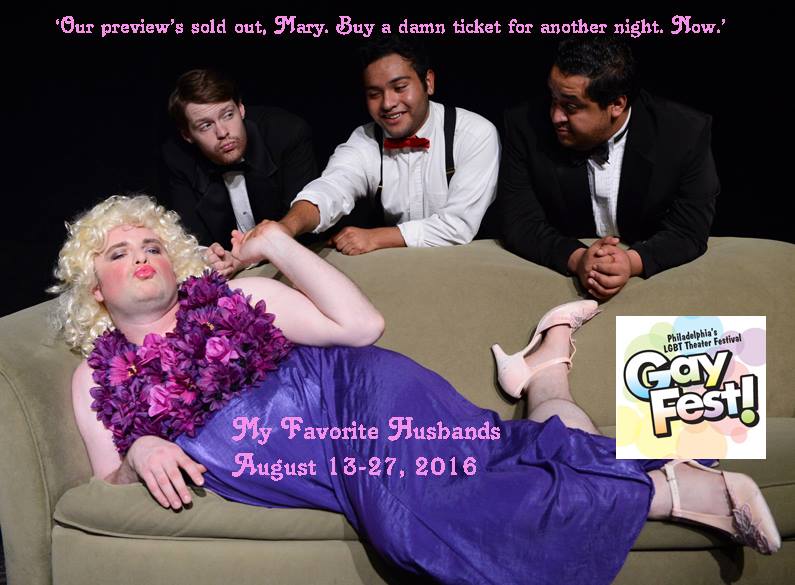 Pay What You Can Preview: Saturday, August 13th at 7 PM 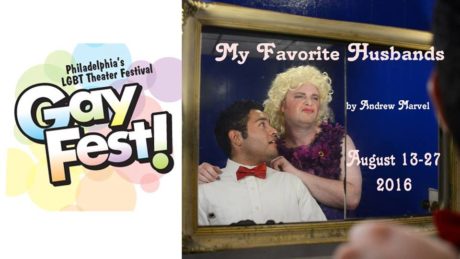