What better reason to leave Elizabethan England than to stage a production of Shakespeare’s The Tempest in the New World and to found an indie theater there? That’s the witty premise of playwright Jonathon Ward’s The Theatre Made in Paradise. Well, that and a whole lot more!

The entertaining comedy-with-a-moral intertwines the narrative of the Bard’s play and its theme about the power of books with a fictionalized history of the Pilgrims’ storm-tossed trans-Atlantic voyage to Cape Cod and the Colonists’ subjugation of indigenous populations to death, slavery, and religious conversion, using an engaging mix of dialogue, movement, music, and sound effects.

It’s 1619, and actor George Greene just happened to snag a copy of Shakespeare’s recent play. Problem is, the Puritans aboard ship with him are not happy about the story’s themes of magic and conjuring, which they see him rehearsing. The sadistic and jealous Puritan John Stanford, whose wife Rebecca just happens to be a former actress in a past relationship with George, thinks it’s the work of the devil and resolves to put him on trial for witchcraft and to burn her at the stake for her sinful ways. Add to the mix an African indentured servant who wants George to buy his freedom, and a Native American couple that doesn’t understand a word of English, and the parodic possibilities increase exponentially.

Danielle Skraastad directs a consistently fine young cast of emerging talents from NYU’s graduate acting program, maintaining a balance of humor with a serious message about people from different worlds coming together in friendship and understanding to create rather than to destroy—just as this team has done to make an original work of theater. They seamlessly draw parallels between the tribal traditions of storytelling and the expressive language of Shakespeare, the supernatural content of The Tempest with that of the Bible, and the reliance on the universal meaning of gestures to communicate when words fail.

There are unsettling scenes of physical abuse by Stanford (played with fervor by John Zdrojeski) and funny attempts to communicate with one another by George and Massosoit (the terrific John Glowacki and Paul Pontrelli, who add a touch of bathroom humor to their language lessons). Sidiki Fofana brings heartwarming poignancy to his role of Stephano Africanus, and Alexandra Templer Waldon (Rebecca) and Neysa Lozano (Askamaboo) give believable strength to their female characters.

The historic era, cultures, and religions are beautifully evoked by Catherine Fisher’s well-researched costumes and original music by Glowacki (“Full Fathom Five”), Zdrojeski (“Fairest Lord Jesus”), and in collaboration (on “Come Unto These Yellow Sands”), performed a cappella by the strong-voiced Glowacki and the ensemble chorus. Jorge Olivo’s sound design captures the fury of the ocean storms (though at times drowning out some of the dialogue), and the cast recreates the motion of the waves, shooting flames of fire, and the sturdy trunks of trees in movement-based segments that set the locales on the mostly bare stage.

There are running self-referencing jokes about the obvious reason that Jamestown was failing, about being an “ACTOR!” (said histrionically, with arms flung out), and about being reduced to solo shows and monologues if the others refuse to join the cast.

While there is a lot going on in The Theatre Made in Paradise, it all remains clear in its meaning, appropriate in its context, and effective in its delivery, and it’s all a lot of fun to watch! 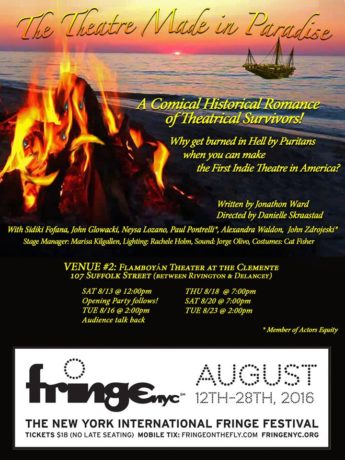 The Theatre Made in Paradise plays through Tuesday, August 23, 2016, performing at the Flamboyán Theater at the Clemente – 107 Suffolk Street, in New York City. Purchase tickets online.