I’ll let you in on a secret. I’ve always wanted to see a mentalist performance. Until now, though, I’d been too scared to ever actually attend one. I’m not the sort of person who yearns for participatory spectacle. I’m so glad I overcame that fear last night and made it down to Max Major’s THINK AGAIN at Baltimore Theatre Project. Max Major’s combination of magic, mentalism, and hypnosis was so much cooler than I’d even imagined it would be. It was an exhilarating evening full of surprises, laughter, inexplicable phenomena, and an unexpected degree of warmth. 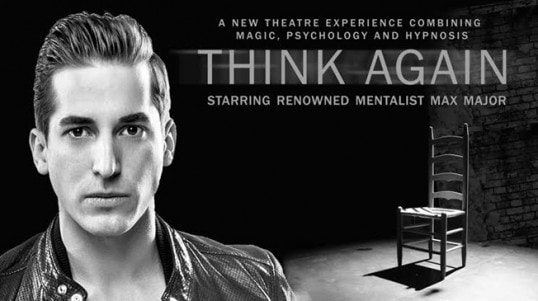 Max Major is a showman and he knows how get an audience psyched for a performance. Waiting for the show to begin felt like a party. A well-mixed collection of electronic dance music, curated by international DJ Neekola, played as a revolving slideshow of Major-related pictures, news, and swag projected on the back wall of the theater. The show itself started with a 10-minute video of various Major events. By the time Major took the stage, the crowd was pumped and ready to be amazed.

With so much build-up and expectation-heightening, Max Major had to put on an amazing show. He totally delivered; the show was awesome. Like dictionary definition awesome: “Extremely impressive; inspiring great admiration, apprehension, or fear.” I don’t want to publish a bunch of spoilers, but I’ll share some general facts.

Max Major is exceptionally observant and has a good handle on human nature. By watching body language, subtle vocal clues and barely-visible tics, he honest-to-goodness can determine a shocking amount of info about a person in a brief interaction. It’s uncanny. He’s like Sherlock, only with better hair. Major enlists audience members and shows how some of the things he can do are possible even without the benefit of years of experience or the thousands of performances he has sold out across the country. We are capable of more than we imagine. If you think you know the limits of your mind’s abilities, THINK AGAIN.

It was the practice of mentalists enlisting audience members in their acts that kept me away from shows like this for decades. I can honestly tell you as a card-carrying introvert that, at least with Major’s show, it’s not super scary. I think the reason is that it’s evident that Major is a nice guy. It’s clear he is not there to embarrass anyone or make you uncomfortable. He fosters an atmosphere of trust and camaraderie with both him and fellow audience members. He wants people to be happy and enjoy the experience.

Need more evidence he’s a swell guy? Major won the accolade of Washington D.C. City Paper’s “Best Performance Artist” in 2011, 2013 and 2014. In 2015, he voluntary dropped out of that category to give other performers a shot at it. Take that, Michael Phelps! He also takes time during his show to encourage people to dare to do the things they love. To use the takeaway message from the evening – that we are capable of so much more than we think we are – and consider pursuing our dream jobs and dream lives.

He’s a nice guy, but also kind of a badass. In addition to his mastery of baffling Jedi Mind Tricks that have you scratching your head hours after you leave the theater, there’s a very physical mind-over-matter aspect to the show. It demonstrates that Major either has a great deal of confidence in his mind-body connection or a general disregard for his personal safety. Perhaps both. Not to ruin your fun with spoilers, but eating a glass light bulb onstage is probably the safest of these physical feats.

Max Major’s THINK AGAIN is an entertaining night out. The magic is magical; the mentalism is mind-blowing; and the physical bits are cringe-inducing. Through it all, Major’s natural exuberance and his joy in doing the thing he loves most is great to watch. I doubt this experience has cured me of my “come on up to the stage” anxiety altogether, but I know for sure that the next time Max Major comes through town, I will be in the audience.

Max Major’s THINK AGAIN plays for five more shows on Saturday, August 13th at 6 PM and 8:30 PM; Friday, September 2nd at 8 PM; and September 3rd at 6 PM and 8:30 PM at Baltimore Theatre Project— 45 West Preston Street, in Baltimore, MD. Tickets may be purchased online or at the door. If planning to purchase at the door, you should call first to make sure they haven’t sold out. For more information and showtimes, go to Max Major’s website.