If you’re a fan of the fright genre and nostalgic for classic Saturday morning TV shows for kids, Playlab NYC’s Humorously Horrendous Haunted Hideaway will have you screaming with laughter! Written and directed by Kevin P. Hale, the one-hour parody is filled with funny faux fear, loaded with lots of alliteration, and punctuated with preposterous puns and witty word plays with macabre meanings (e.g., sending a ‘skelegram’ “Tomb It May Concern”).

Played with sinister delight by the terrific Scott Michael Morales and Aprella Godfrey Barule, hilarious horror hosts Ernest Headstone and Ima Knotgoth lead the audience through a night of supernatural scares, spooky sounds, and gruesome severings as they attempt to exorcise (or is it exercise?) The Blood Banshee that has been terrorizing their favorite haunt. Along with the hosts, a volunteer from the audience is chosen to participate in “The Post-Mortem Game” and a mysterious man, known only as The Mad Creeper, appears and disappears throughout the scenes.

The fun and frights are supported by a devilishly delicious design. Ima’s ghost-white dress is woven with cobwebs and Ernie’s outrageous outfit and morbid make-up evoke a mash-up of Pee Wee Herman and Uncle Fester from The Addams Family. Sound by Jeanne E. Travis and lighting by Jennifer Linn Wilcox are appropriately hair-raising.

Go see Humorously Horrendous Haunted Hideaway if you dare; it really is a scream! 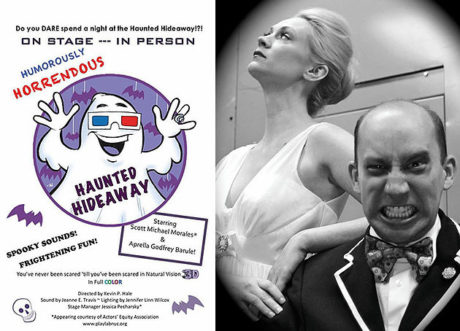 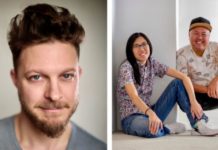