Our Gang Players took on a big undertaking with their production of Anything Goes this past weekend and it was surely an afternoon pleasure cruise. This Cole Porter musical classic with book by P. G. Wodehouse, Guy Bolton, Howard Lindsay, and Russel Crouse, sailed on in the summer heat at the Stafford Township Arts Center. Our Gang Players, with director Jessica O’Brien at the helm, provided an afternoon of comedy, singing, and dancing.

Nightclub singer (and sometimes Evangelist) Reno Sweeney (Lindsey Monaco) is traveling from New York to England. Billy Crocker (Glenn Parker), her pal, has stowed away to be near his love, Hope Harcourt (Jennifer Baker). We find, however that Hope is engaged to the wealthy Lord Evelyn Oakleigh. Reno and Moonface Martin (Nick D’Ambrosia) who join forces to help Billy win Hope’s affection. There were great disguises, tap dancing, and good old blackmail.

Monaco, Parker, and D’Ambrosia had a wonderful number called “Friendship,” and the three actors did not disappoint with their singing and dancing.

Monaco’s belting in “Anything Goes” and “Blow, Gabriel, Blow” stopped the show.

Monaco and D’Ambrosia were a perfect comedic duo. There were laughs every time they were onstage. I really loved the comedy chops that D’Ambrosia displayed with  all the one-liners he delivered; one after the other.

I also enjoyed the performances of Neil Goldstein (Sir Evely) and Edward Itte (The Steward) who delivered excellent deadpan delivery.

Parker shone brightly when he was performing in a dance number or singing a duet with Monaco or Baker like “You’re the Top” and “It’s De-Lovely.”

This musical romp was also choreographed by Director Jessica O’Brien. Her mastery at coordinating full company tap numbers made numbers like “Blow, Gabriel, Blow” and the theme song a stunning spectacle. Also navigating Reno and Billy up and down spiral stairs in “You’re the Top” was a lovely way to open the show.

Unfortunately, there were some sound balance problems at my performance. I hope they were resolved for the final performances.

The elaborate colorful costumes were designed by Lottie Vandergoot. Her design for Reno and her Angels’ dresses were very noteworthy. The big cruise ship set was rented from the M&M Stage Productions production at the Kelsey Theatre. Mark Keeler and MK Productions provided sound.

Our Gang Players has been performing for nearly 40 seasons. Many people onstage and backstage had been with the company for many years and they boast that anyone who has a desire to get involved onstage can participate. You can tell that what they do is a labor of love and that they are all family.

Running Time One hour and 45 minutes, with a 15-minute intermission.

Anything Goes played from August 12-14, 2016 at Our Gang Players performing at the Stafford Township Arts Center (S.T.A.C.) – 1000 McKinley Avenue, in Manahawkin, NJ. 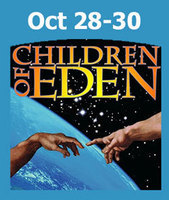 Purchase tickets to their next production, Children of Eden, which plays October 28-30, 2016 at the Stafford Township Arts Center.