A diva in the best sense of the word, Barbra Streisand has always understood that only an artistic perfectionist could span decades inspiring generations with her God-given vocal instrument —and, indeed, Ms. Streisand proved that she could still hold the audience in the palms of her beautiful hands at the Verizon Center last night.

I have had the privilege of listening to the magnificent vocal artistry of Ms. Streisand three times previously in a concert venue so I was quite surprised and even had to give myself some extra space for absorbing and processing the exciting new direction in which she had quite obviously decided to propel this concert. Gone was the 100 or 200-piece Orchestra and huge walkways and more outwardly “grandstanding” style —yes, Streisand can belt with the best of them but she infused this concert with an air of free, almost joyful “in the moment” abandon and a very relaxed lack of inhibition which was a pleasure to savor.

Caressing a set of some 22 songs (or so—) , and backed up by a ten piece –personally–picked orchestra, Streisand looked radiant and chatted with a very conversational patter as she appeared on the stage and cascaded through a diverse and eclectic mix of songs for all tastes. Perennial favorites were carefully interspersed with newer and more less-performed songs.

As befits a Barbra Streisand concert, musical arrangements were all top-notch, with “edgy –thrusts”— and quite markedly arranged with meticulous and carefully calibrated calibration. It was nice to hear the ever-vibrant Streisand’s vocal dexterity come through loud and clear without being overpowered by too much accompaniment.

A highly original and colorful filmic assemblage of various historical moments, record covers, fashion shoots and film clips were captivatingly captured as the “backdrop” to much of the live proceedings on stage and this multi-media concept worked exceedingly well. Lighting of various musical numbers was extremely theatrically effective as shafts of multi-hued lights splayed over the stage space in a pronounced and dynamic fashion.

Streisand’s vibrant sensuality and natural authority on stage coupled with her ferocity and drive and fierce political activism —have made her a stimulating and provocative political power. Her androgynous appeal as exemplified in so many of her influential hit films have justifiably made her one of the three greatest gay icons in the history of show biz.  (Bette Davis and Judy Garland being the other two pre-eminent Gay favorites). In last night’s concert, it was obvious that Streisand’s appeal spanned every demographic from straight, gay, black, white, old, young, to the politically active and to vocal and artistic purists of all stripes.

Undoubtedly, though, it is Ms. Streisand’s sheer artistic musicianship and vocalizing that has made her the legend she has rightfully become.  Streisand always interprets each song with such controlled yet theatrical fervor —each number is akin to a well-developed three-act play. Every image and every note serves to present an evocative and thrilling musical story. This ability was most markedly shown in a devastatingly tormented rendition of Sondheim’s “Losing My Mind” from Follies.

Streisand’s voice continues to possess an edgy timbre and sheen that has sent chills down the spines of appreciative audiences for generations. Barbra’s voice has matured with the years —-this effect has produced a wholly satisfying burnished glow or coda to the concluding notes of her songs.

Streisand excited the crowd to almost maniacal musical frenzy as she quite decidedly opted to push through and embrace the “ever-so-slightly ”gruffer timbre of her most upper register ——-this “all-out” emoting breathed new emotion and life into several thrilling concluding verses and lines especially in the best cover I have ever heard of “Don’t Rain on My Parade”.

Opening with the sentimental and heartfelt favorite “The Way We Were” was an auspicious and apt choice (and the memories of Streisand brushing Redford’s face in the film of the same name continue to flood the collective consciousness–).

A romantic triptych of the many myriad progressive stages of love was another triumph as exemplified in her emotive encapsulation of the vicissitudes of love ——from the complex “Being at War with Each Other” to the tentative hope and affirmation of “Everything Must Change” to the jubilant radiance and triumph of the Streisand up-tempo favorite “Woman in Love.”

Pop hits and cultural touchstones from Streisand’s career took the lead as she sang the Oscar –winning “Evergreen” and the ever-popular “You Don’t Send Me Flowers.”

A hearty nod to Composer Stephen Sondheim was again portrayed in the stunning medley “Being Alive” from Company and the ruminative, poetic “Children Will Listen” from Into the Woods. Streisand soared to a soaring crescendo with the concurrent moods of pain and joy with her cover of “Being Alive.” Streisand carefully elongated each phrase from “Children” and instilled an almost “reverie –like hush” throughout the audience with her plaintive and searching rendering.

Like all great singers, Streisand showed the instinctive, inherent understanding of the exquisite timing and interpretative phrasing ability to perform a song from a sense of utter quietude (as she also does when she sings the opening prayer by the light of the flickering candle in “Papa, Can you Hear Me?” from the film Yentl).

She can take a very uplifting traditional classic like “Evergreen” and turn it into so much more than a spiritual anthem. By virtue of a superior arrangement and a novel, more exploratory approach to the lyrics—Streisand creates a whole new song as if drawn from thin air and realized into a new musical touchstone.

Perhaps the penultimate highpoint amongst a concert full of so many such moments was Streisand’s oft-performed rendition of “Happy Days Are Here Again.” Streisand triumphed here as she imbued the song with equal components of grit, triumph over despair and a melodic pathos that hope remains eternal even in the most trying of times.

This sense of a vulnerable, tremulous soul fighting for dignity and idealism in a world that quite often seems uncaring is the germination of Streisand’s emotive and vocal genius.

Barbra Streisand’s current concert at the Verizon Center last night gave us all the gift of a more intimate and relaxed Barbara still at the height of her artistic and vocal powers. Beyond any shadow of a doubt, Barbra Streisand’s influence will continue to inspire new generations of singers for decades to come.

Running Time: Two hours and 15 minutes, with one 20-minute intermission. 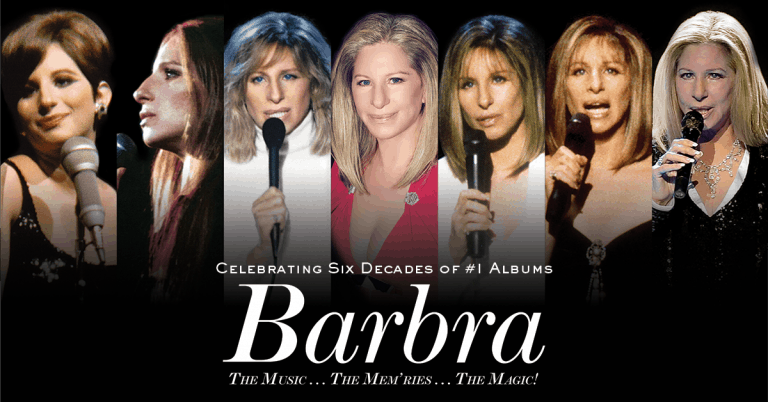 Barbra: The Music… The Mem’ries… The Magic! was presented on Thursday, August 18, 2016 at the Verizon Center – 601 F Street, NW, in Washington, DC. For future tour dates, go to Barbra Streisand’s website.