Do you know your neighbors? Even their names? Years ago, (before the internet, video games, and cable TV), people routinely visited their neighbors, to share cups of sugar and companionship. Today, we are so ensconced in our private worlds, we resent anyone even ringing the doorbell. And sending the children out to play? Impossible.

Lisa D’Amour powerfully renders this theme in a long speech in the first act of Detroit. Sharon (Jessica Myhr) is stunned when she and her equally white trash husband Kenny, (Daniel Hilt) are invited to a backyard barbecue by their neighbors, the seemingly affluent Mary (Nina Covalesky) and her husband Ben, (Alan Dronek). But things are not what they seem.  Mary has a severe drinking problem, while Ben, newly laid off from his banking job, spends his days online, doing who-knows-what. Sharon and Kenny are so poor that their affluent house, which they rent from a relative, has no furniture. Mary and Ben serve steak and caviar.  Sharon and Kenny serve Cheetos and bottled bean dip. In the five or so weeks the play covers, the characters become closer while the audience discovers that no one is who they say they are. Or even what they think they are.

Detroit’s skill with long speeches continues throughout. Mary convincingly describes the feeling of dragging yourself to work while her husband stays home. Kenny has a striking monologue as he seduces Ben to join him at a sex club; an event neither can afford.

D’Amour is obviously quite conversant with addictions. The descriptions of rehabs, the euphoria, struggles and fears of drug addiction, not to mention daily drinking, are remarkably convincing. Sharon describes her condition: “Every day really is a new day, but. Mary, I open my eyes every morning and all I want is a pipe to smoke. It’s like there’s a fire burning in the center of my head, and the pipe is the water that will put it out.” Well done.

In later moments a new character, the older neighbor Frank (Michael Hajek), offers an elegiac memory speech about the various Levittown developments that sprang up after World War two, and offered everyone the dream of their own little home.

Theater With a View offers this Equity production outdoors in the backyard of an affluent home. There is certainly an impressive view nearby, but most of the play takes place on the back patio. It is not really immersive theater in the manner of Natasha and Pierre, or, Sleep No More; there are no trees climbed or skyrockets set off. What you do get from this approach is intensive realism.

The play’s starting time is 7 PM for all performances, which means that the falling of night will become part of the experience, as well as the crickets, or the planes overhead. Since the house is a major player in the play’s themes, it is natural that it should dominate the production.  There are only three rows of seats, which means that the actors do not have to project. This conversational tone of performance creates an audience that truly believes it is eavesdropping on a real event in a neighbor’s backyard.

The acting and directing are certainly up to the challenge. Each performance is razor sharp in its delineation. Nina Covalesky as Mary plays a 20-minute scene downing 2 large glasses of vodka, and convincingly segues from sobriety to inebriation. Both Mary and Ben positively seethe with the underlying frustration of their hollow lives. Myhr and Hilt totally embrace addicted-in-recovery “white-knuckle” personas. These misfits absolutely live in the moment, never thinking of the future, which creates most of their difficulties.

Director Seth Reich, uses the “set” with a firm hand, increasing the audience involvement. The script calls for two backyards, but TWV has to make do with one, a bit of a loss. Jessica Myhr’s wardrobe acquisitions, mostly shorts and t-shirts, are right on in defining the characters, (such as Kenny’s holster pistol tee.) 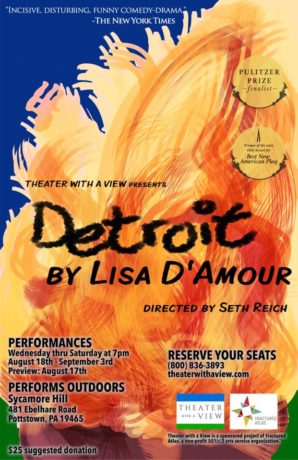 Detroit premiered at the famed Steppenwolf Theater in Chicago, and was also presented by the National Theater in London, and Playwright’s Horizon in New York. It is not a major work like August Osage County or Long Day’s Journey into Night, as the short running time allows the themes to be introduced but not really developed.  But Lisa D’Amour is certainly a playwright to watch. Her recent Broadway production, Airline Highway, received four 2015 Tony nominations.

An added note: Theater With a View is in an actual backyard in a GPS defeating area of South Pottstown. There is nothing to identify the theater, and yours truly passed it by a number of times. The website offers a map to the site. Print it and take it with you.

Running Time: 1 hour and 45 minutes, with no intermission.