Step Afrika! will present free performances in all eight wards of DC from August 24 to September 20, 2016. The full schedule of 2016 tour dates is available online. 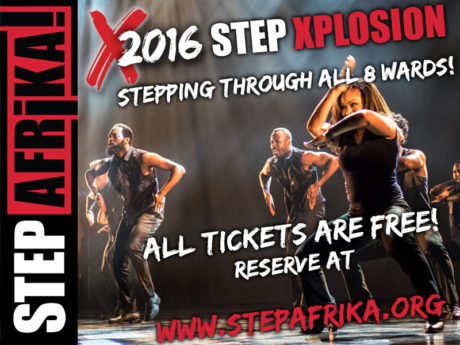 “I just discovered a phenomenal performing arts group that rocked and moved me as much as any experience in theater I can recall. The name of the group is Step Afrika!, an organization renowned around the world for its use of the traditional dance form of stepping to inspire young people, build community, develop talent, and much more.

I had heard of Step Afrika! but it was not on my mental map of the DC theater landscape. I thought of it as something separate, as dance (an art form I can appreciate but I never look to, as I do to theater, as my soul sustenance of choice).

Within minutes of watching a Step Afrika! performance the other day at Pepco’s Edison Place Gallery—it was called Step Xplosion, a free show that tours all eight wards of the District every summer—something began to stir in me and flood me. By the end, exhilarated and blown away, I realized that Step Afrika! is completely of a piece with everything that matters most to me about theater. As art, as lens on life, as live performance, as communal ritual, as collective humanizer, as moral compass, as change agent (the list goes on), Step Afrika! purely as theater is absolutely extraordinary.

This is my short list of what impressed me:

The virtuosity of the performers (all utterly amazing); the caliber and precision of the choreography (inventive and inspired); the connection and engagement with the audience (a bond built, never broken); the percussive, propulsive beats (the surround sound of unison hands, feet, and voices); and especially the stories—set up in a spoken introduction then told implicitly and powerfully solely through sound and movement (stories of political unity and resistance, of racial justice, of gender equality, of human worth and hope).

All performances are free. Reservations online are recommended.