On June 25, 1906, famed architect Stanford White, of the firm McKim, Mead & White (among whose most noted works is NYC’s Washington Square Arch), was shot and killed by crazed multi-millionaire Harry Kendall Thaw while attending the premiere performance of Mam’zelle Champagne in Madison Square Garden’s rooftop theater. Hailed by the press of the time as “The Crime of the Century,” the infamous case from early 20th-century American history is the subject of Synapse Theatre Ensemble’s Dementia Americana, written by Louis Aquiler and Chris D’Amato.

Immortalized in the 1955 film The Girl in the Red Velvet Swing, the sensational story continues to resonate today, as much for the brazen murder motivated by Thaw’s rage over White’s sordid sexual past with his wife, teenage chorus girl Evenly Nesbit, as for the murderer’s defense plea of the titular “dementia Americana”—an ostensible form of temporary insanity that overcomes a man who believes his home or family has been violated. Directed by Paul Mancini, the new play, reimagined from the perspective of Freudian psychoanalyst Rollo May (whom the playwrights fictitiously insert into the case as narrator and doctor to the mentally disturbed Thaw), combines reportage and reenactments of the true events with dark humor and biting commentary on a legal system that [still] allows the rich to get away with murder.

D’Amato stars as the lunatic killer, capturing his privileged lifestyle of self-indulgent excess and sociopathic behavior, including his sadistic proclivities, psychotic babbling, and uncontrolled rage, as his portrayal alternates between sardonic derision and terrifying accuracy.

The supporting cast is also excellent, with Kenneth Robert Marlo as the philandering and imperious White (donning his iconic over-sized mustache); Kari Buckley as the young Nesbit, the object of the men’s sexual advances and abuse; and David Shaw as the failed but principled therapist Dr. May.

Rounding out the ensemble are Rachel Pearl as the overbearing mothers of both Thaw and Nesbit, and Lizzy Ana Lincoln, as the attorneys for both the prosecution and defense; among the show’s most amusing scenes are their split-second transitions from one role to the other.

Turn-of-the-century costumes, Bentwood chairs, and recorded period music evoke the era, and dramatic lighting by JT Diaz accentuates the plot points. With its intelligent and well-researched script, fine acting and direction (including some entertaining segments of silent-film-style miming), and effective design, Dementia Americana succeeds in conveying both a fascinating event from our past and a socio-political statement that remains relevant in the present. 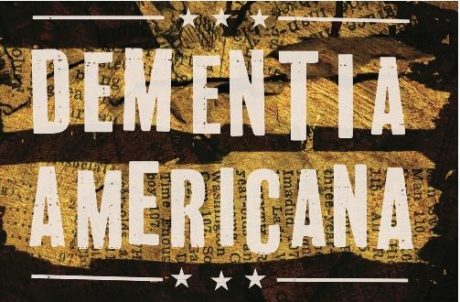