Here’s Part 2 of the staff of DCMetroTheaterArts’ favorite Spring/Summer 2016 performances. To our honorees: TAKE A BOW! 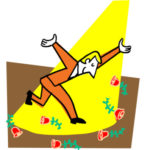 Stori Ayers as Alma (and others), in Yellowman at Anacostia Playhouse.

Stori Ayers’ performance as Alma is magnificent. The hurt inside the character—which Playwright Dael Orlandersmith’s script makes explicit—coexists in Ayers’s incandescent embodiment with a warmth, humor, and largesse of spirit that is a wonder to behold. And when in an instant she transforms into Alma’s mother, the bile and self-loathing she brings to the role is shocking. Solely the evidence of Ayers’s performance in this production, she is clearly an actor with a depth and breadth of range and indelible presence that great roles are written for.-John Stoltenberg.

Iyona Blake who plays Gran Mimi, Jelly Roll Morton’s Creole grandmother is a powerhouse vocalist with a stage presence that can be described as imposingly magnificent. Her mesmerizing performance as the high “yalla”, highbrow mulatto matriarch who banishes young Jelly Roll from the family for not preserving “The Creole Way” sheds artistic light on the psychology of racial identity and the emotional scars which underlie the dramatic conflict in Jelly’s Last Jam.-Ramona Harper.

Leila Buck in Hkeelee at Mosaic Theater Company of DC.

Leila Buck‘s performance in Hkeelee, her powerful one-woman show about the process of “becoming,” combines those two most precious aspects of theatrical dynamism: intimacy and pizzazz. As Ms. Buck brought her  Mosaic audience into the intimate details of her relationship with her Teta (her Lebanese Grandmother), she filled Arena’s Kogod Cradle with life’s tiny titillations, the kind that electrify the air not with mega-stars, but with every day wishes and desires.-Robert Michael Oliver.

Alan Held as Wotan in The Ring Cycle: The Rhinegold at Washington National Opera at The Kennedy Center’s Opera House.

As Wotan, Bass-Baritone Alan Held sang with authority yet concurrent sensitivity to each new scenario. Mr. Held beautifully elucidated the proper balance between his internal struggles with lust for greedy power and devout love for his family-David Friscic.

Jeremy Keith Hunter as Devaun in When January Feels Like Summer at Mosaic Theater Company of DC.

At the beginning of this play by Cori Thomas, Jeremy Keith Hunter plays the Harlem homeboy Devaun with delightfully antic swagger, loudly bantering about “getting with” women and boasting cocksurely of his experience. Hunter’s is a larger-than-life comic performance that keeps getting more impressive as the play goes on. By the end, Devaun has begun an unlikely bicultural romance with 28-year-old who is transitioning to live as a woman. There arises a sexual chemistry between them that is beautifully believable and amazingly moving, in large measure because Hunter brings to each libidinous instant of it such unstinting emotional conviction that we see the woman he has fallen for through his adoring eyes.-John Stoltenberg.

Alan Naylor as Angel (though not identified as such in the program) in Going to a Place Where You Already Are at Theater Alliance.

Beautiful sound and lighting effects can create a sense on stage that we are in heaven, but in Theater Alliance’s production of Bekah Brunstetter’s Going to a Place Where You Already Are, it is Alan Naylor’s winning and nimble performance that is truly our entrée to the play’s magical realism. His appearance is inexplicable at first. He hovers solicitously and mysteriously on the sidelines wearing a sleek blue suit and white sneakers without socks. He hands a hymnal to two parishioners when it comes time for them to sing along with a churchful of mourners. Later we learn he is an angel, a son who died in his youth and grew up gay in heaven. Naylor’s sensitive and transporting performance literally lifts the show to a hereafter that we get to experience through him right now.-John Stoltenberg.

Bobby Smith is nothing short of transcendent in the challenging role of an aging drag queen. He turns in a multi-layered, nuanced depiction of Albin’s private life as well as his onstage persona Zaza, with equal parts of sensitivity and hilarity. Smith’s comedy timing is perfect; his acting and dancing are top-notch; his vocal range and voice dynamics are superb.  When he performed the iconic anthem, “I Am What I Am,” he stopped the show. A tour de force performance!-Barbara Braswell and Paul M. Bessel.

Chris Stezin as Father Welsh in The Lonesome West at The Keegan Theatre.

The marvelous actor Chris Stezin portrays this priest as a person trying fervently to hold on to any sliver of hope and redemption. Stezin’s complex yet amazingly direct and self-possessed portrayal of this Irish priest is the emotional center of this play-David Friscic.

Kirsten Wyatt as Tammy Faye Baker in Born for This: The BeBe Winans Story at Arena Stage.

Kirsten Wyatt gave a knockout performance as the feisty firecracker, Tammy Faye Bakker. Kirsten’s Tammy Faye is over-the-top. Irreverently funny, her terrific comic timing and shrill-voiced histrionics are a blast, all in the name of the Lord. Big as a minute, the diminutive Kirsten Wyatt as Tammy Faye commands the stage with Napoleonic chutzpah.-Ramona Harper.

Tiziano D’Affuso as Birdlace in Dogfight at The Keegan Theatre.

As the lead character, Birdlace, Tiziano D’Affuso plays the hell out of his part.  D’Affuso commands the stage with an authoritative yet unstudied and natural stage presence. What a future this leading man has in store for him!-David Friscic.

*This performance was one Mr. Friscic wanted to honor because he missed doing so in the Fall of last year. It’s never too late to honor a fantastic performance.