Chip: Please tell our readers where they may have seen you appear on our local stages and roles you have played.

David: I’ve been part of Providence Players (“PPF”) for 12 years: I was cast in and co-directed PPF’s production of The Good Doctor with my wife Beth, in January of 2004. I have been an active member of PPF ever since, also having led the organization’s board as President and Treasurer. I have had the pleasure of portraying many roles for PPF, including Scrooge and Marley in (different productions of) A Christmas Carol, George Bailey in It’s a Wonderful Life, Gabe in Dinner with Friends, Chris in All My Sons, Banjo in The Man Who Came to Dinner and roles in Snow White and the Family Dwarf and The Lion, the Witch and the Wardrobe.

Salieri is one of the biggest and most coveted roles in theater and film. What challenges do you face playing Salieri and how have you managed the sheer amount of lines and stage time?

It is a true honor to be picked to play this amazing role – one truly coveted by many actors in the profession. I knew it would be an incredible amount of work, and I just made the commitment to do what was required to ensure that the role receives its due.

The biggest challenge for me is to “fill” Salieri in the way Shaffer intended.  Learning lines is just the first step – the real challenge is filling those incredible words, visions and poetry – yes amazing poetry – in a way that help the audience understand the struggles and redemption (if any) for Salieri. Like Shakespeare, Shaffer has chosen very specific images and descriptors to carry the story to its conclusion. I will relish every moment of time Shaffer has given to Salieri and the entire ensemble to bring this story to life – an incredible story for our age.

The author of Amadeus, Peter Shaffer, died the same day that your company announced the show to the membership. How does Sir Peter’s passing alter this performance?

It makes this particular production incredibly special. Julie Janson already brings an amazing passion to the piece – and this raises it another notch. We want to honor him with this portraying – and celebrate the symphony of piece he has left the ages.

For the most part, your production will not be using traditional 18th Century costuming and design in an effort to convey the timelessness of the work. How do you feel about this direction?

I love it! Yes, the story is about a particular moment in time, but the themes and struggles are timeless – and we can all relate to them today and tomorrow. Making it even more relevant to today’s audience, bringing it just a little closer to today is a wonderful approach and I’m very excited about it.

What does Amadeus bring to today’s audiences? Why should people see this particular run?

It’s an amazing cast and crew. It has a very talented group of individuals and I’m honored to be a part.

Traditionally, Amadeus mimes the musical pieces of the show but your production will have some live singing and playing. What do you feel this brings to the show? Do you play piano?

Yes, I love this about the production I was trained as a classical pianist from the age of 7, and have always found being able to play music – both classical and modern – a true gift to a full and creative life. Being able to share just a little of that on stage in this piece, particularly, is fun and should be engaging.

How have Director Julie Janson and Music Director Kyle Keene helped you and the cast to mold your performances?

Julie’s vision for this production is so clear. Together we will shape the audience’s experience with Salieri through his war with God, Mozart and his path of self-destruction. It is a true partnership. The music is the very soul of the piece – Mozart’s music is the “…spirit singing through it…” and Kyle’s passion for Mozart’s music is a key ingredient. He also will be instrumental with helping us with the languages – having been a vocal coach for scores in German, Italian, and French. It’s an amazing production team!

Why do you think Amadeus is still so popular so many decades after it opened?

It’s themes remain relevant, and audiences can relate. The fact that is within a historical context makes it more real – particularly with a figure as brilliant as Mozart. Music is universal. As Shaffer says, “It’s God’s art!” 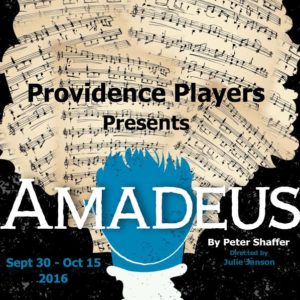 Swelling with the glorious music of Wolfgang Amadeus Mozart, this psychological mystery has played to thunderous applause the world over. The scene is set in Vienna, 1781: the young Mozart can write an opera a week but can’t control his exuberant giggling and notorious libido. Antonio Salieri–until now the royal court’s most lauded musician–recognizes Mozart’s genius, calling him “God’s magic flute.” Pious, wicked, and soon to be guilt-ridden, Salieri tries everything to subvert the success of this enfant terrible. Will that include murder?

Here Are Performance Dates And Times: