What do you get when you mix The Picture of Dorian Gray with Sunset Boulevard and Valley of the Dolls? A high-camp melodramatic parody on the consequences of aging in a profession where youth and beauty are prized, and on the temptation of leading a hedonistic lifestyle filled with sex, drugs, and alcohol versus recognizing the value of true love. Those are the themes of the new musical The Vanity, with original book, music, and lyrics by Peter Covino and dramaturgy by Erik Ransom, opening this month at The Clurman Theatre in Theatre Row, following a series of in-development previews. 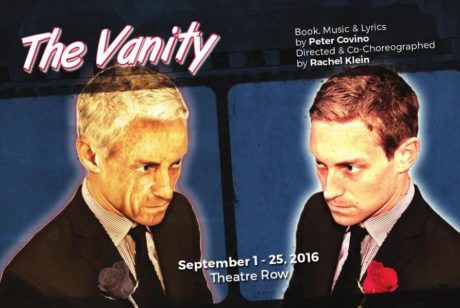 The story begins in 1947, when southern plantation heir Julian Gray moves to Hollywood. His good looks immediately catch the attention of famed but disreputable director Hilton Wheelan, who casts him as the lead in his new film, and makeup artist Stella, with whom he shares an instant attraction. The plot thickens when Julian inherits a vanity table and mirror possessed by the spirit of a distant ancestor, who offers him eternal youth if he is willing to forgo love in pursuit of unbounded sensual pleasure. Fast forward to the 1960s; Julian and his offbeat coterie from the past, along with some curious new acquaintances, must face the ultimate consequences of his decision.

I had a chance to talk to members of the cast and team of The Vanity after their second preview performance. Director Rachel Klein, Music Director Luke Williams, and actors Patch David (Julian Gray), Brandon Haagenson (The Spirit), and Erik Ransom (Hilton Wheelan) shared their insights about the evolving show, its characters, and the protagonist’s enticing dilemma.

Deb: What is your vision of the show?

Rachel: The Vanity is a Faustian tale whereupon Julian, the protagonist, is confronted with a choice between eternal youth and true love. It’s a straightforward concept, but what excited me most about the piece is that it’s set in the Golden Age of Hollywood, which allowed me to take risks with truly theatrical staging and larger-than-life characters. Making these over-the-top stylistic choices can be a crapshoot, but I find it to be a sandbox very much worth playing in. I sort of see it through a Pink Flamingos/Kenneth Anger/Douglas Sirk lens, a form of complex, postmodern camp, which is where the style currently sits.

The cast, Music Director Luke Williams, and the design and production team are some of the most talented people I have met, and it’s been a great experience to have the opportunity to work with them all on the development of a new project. New work is always a challenge, akin to solving a jigsaw puzzle, and although the show is currently in previews, we’re still continuing to place those pieces where they belong. I am incredibly fortunate to be working with such a wonderful group of artists, and my greatest hope is that they’re having a blast on––and off––the stage.

Luke: I’m incredibly proud of the cast, crew, and the whole production team; it has been a joy to work with these brilliant talents. Across the board, everyone has been terrific! The show is still a work-in-progress, and there has been a lot of effort going into it, but we’ve already made immense improvements, and Rachel is a paradigm of patience, hard work, and creativity.

Before I was brought into the project, there was a requirement to use every note of the score, so the orchestration had to include a lot of synthesizer. Moving forward, I’m looking for less synthesized sound and more period-style music. I love what Ilene did with her original reprise of “Prince Charming” [Ilene Kristen, the Emmy-nominated actress of stage and TV, who turns in an absolutely hilarious performance as Claudia Wheelan, the aging star and wife of Hilton]. It’s so period appropriate, it completely fits the style of the ‘40s. I like Rosalie Burke as Stella singing “What They Want”—there’s a lot of joy, and it’s also in keeping with the mood of the era. And I’m quite happy with “Wicked for a Day” [sung by the harmonious trio of Erik Ransom, Patch David, and Roger Yeh], which we adjusted a bit to fit the time and setting of the show. It brings a dose of ‘Old Hollywood’ vitality, and I like vitality!

Brandon: One of my favorite parts of doing The Vanity so far has been putting two styles next to each other: Oscar Wilde, as set in the Golden Age of Hollywood. ‘Beauty is a curse’ is explored deeply in The Picture of Dorian Gray, and 1940s/60s Hollywood has been a really fun setting in which to play with that theme.

Erik: In the days when I was doing Coming: A Rock Musical of Bibical Proportions, Scott Johnston dubbed me the Oscar Wilde of Philadelphia, and even before that I was a big fan of Wilde and his particular brands of wit and tragedy. I know that The Picture of Dorian Gray is an oft-musicalized book, which is why I think it was important that this production went a different direction than a literal adaptation. I love the idea of setting the story in the Golden Age of Hollywood, a time and place where the themes of Dorian Gray are heightened in a different way. Obviously, I’m no stranger to kitsch and camp, and I’m thrilled that I get to inhabit such an exaggerated world in this piece.

How do you see your character?

Erik: My character Hilton Wheelan is a sort of 1940s parallel to Lord Henry from the source material–an opportunistic, libertine, pansexual film director with a Mid-Atlantic accent and plenty of snappy nasal punchlines. It’s a really fun role, and it’s been amazing working alongside such talented performers, designers, and directors. Once again, Rachel Klein has been able to work her magic, to enhance the over-the-top hilarity of this spoof on the old cinematic melodramas of the period in question.

Brandon: I play The Spirit, who is trapped in a vanity mirror and manipulates Julian, an aspiring young actor, into selling him his soul for eternal youth. The Spirit sees something of himself in Julian and someone to share in his decadence, so he entices Julian into living an indulgent carefree life. But they both learn that youth, beauty, and material pleasure are pointless without someone to share them.

Patch: Julian is a true southern gentleman who wants to find love. He never moved to LA with the thought of being an actor . . . the opportunity just happened to fall into his lap. Even with all of the fame and glory, however, his main focus is to find someone to settle down with. Unfortunately, drugs, alcohol, and some unsavory characters distract him from all of that and he loses his innocence. He sells his soul to a demon in exchange for eternal youth. He cannot, however, rid his mind of the idea of true love. He is a lovely character who undergoes an incredible journey, wherein he eventually remembers that there is more to life than the way you look.

If you had the opportunity, would you take the deal that Julian was offered?

Rachel: I can’t even count the amount of times I have found myself in a sell-my-soul situation! I haven’t taken the bait just yet, but who can tell what the future holds?

Luke: I don’t think I would. Living forever sounds terrifying to me, plus it would take away the pressure of trying to do good work here and now. I think you need that fear to achieve.

Patch: Personally, I would not take the deal. I know too many amazing people in this world and I would not want to be left alone without them. I want to experience the full journey of life.

Many thanks to all of you for your comments, as you continue to make progress towards opening night!

Rounding out the terrific cast of The Vanity in multiple roles are Remy Germinario and Kate Hoover, whose characters Declan and Betty provide some of the funniest bits in the show. The artistic design features a set and props by Joseph Croghan, lighting by Christina Watanabe, sound by Ashton Michael Corey, and choreography by Danielle Marie Fusco and Rachel Klein, who also did the costumes, all of which evoke the styles of the ‘40s and ‘60s, and the Victorian era of The Spirit.

And Luke Williams leads a top-notch live band on percussion and harp, with Brandon Sturiale on brass, Justin Fischer on strings, and Dan Pardo on woodwinds.

All I want for Christmas is ‘The Boy Band Project: Holiday Edition’ at NYC’s Feinstein’s/54 Below