The Kennedy Center’s 15th Annual Page-to-Stage Festival took place on Labor Day weekend, with over 50 D.C. area theaters participating. Through free readings and open rehearsals, the Festival offers a tremendous opportunity for the community to experience part of the creative process of brand new plays and musicals, in different stages of their development.

Subject matter varied tremendously, from relationships to politics, and target audiences started as young as toddlers. One of the Festival’s family friendly creations, Wendy: The Girl Who Grew Up, was presented by Monumental Theatre Company, a group founded in 2015 by Jimmy Mavrikes, Michael Windsor, and Beth Amann, whose website purports their dedication “to fostering new work and providing platforms for emerging writers and local artists.” A sentiment that falls perfectly in line with the Page to Stage concept.

Wendy: The Girl Who Grew Up is a musical and tells the story of Peter Pan, with book and lyrics by Gretchen Midgley and music by John Henderson. Not so much a sequel but more than a reimagining, the story is told from Wendy’s perspective.

Wendy is an adult and her daughter, Jane, is at the threshold between being a child and growing up.  Through re-living her time with Peter, Wendy remembers the wonderful uncertainty of childhood and realizes that she must let Jane experience her own adventures.

The piece was presented as a staged reading, with direction from Walter Ware III and musical direction by Walter McCoy. The music is beautifully layered, adding to the magical feel of the tale, and has an ethereal flow to it that immediately transports you into the imaginary world of Peter Pan and Neverland.

The cast of characters are mostly familiar, with only adult Wendy (Jennifer Lambert) and Jane (Danielle Donnelly) as new roles. There is, of course, the title role of Wendy (Molly Janiga) with Peter (John Sygar) and his Lost Boys (David Singleton and Tiziano D’Affuso), who rescue Tiger Lily (Korinn Walfall) from the dreaded Hook (Brent Stone) and his men, Smee (John Loughney), and Starkey (Kamau Mitchell).

The reading was touching and fun, even in its unfinished form, with incredible music. There was the longing and hope of “In My Dreams,”sung by Jane; The youthful determination of “My Way,” performed by Peter, Wendy, and the Lost Boys; The villainous buffoonery with “On the Hook,” by Captain Hook and his men; And a powerful call to battle “Once and For All,” sung by the entire Company. The only seeming missing pieces to the show, such as Tinker Bell and flying, were technical touches that would appear in a full-blown production. 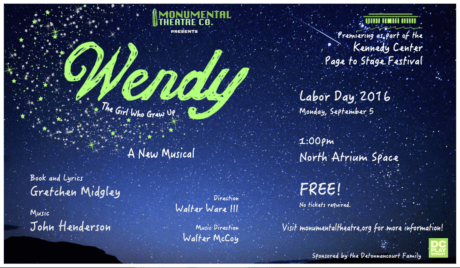 Monumental Theatre Company’s staged reading of the new musical, Wendy: The Girl Who Grew Up, at The Kennedy Center’s Page-to-Stage Festival was very well-received and is sure to be a great success when the show appears in its full realization. I, for one, am excited for the finished product and cannot wait to see where this great new work will go.