Emptiness. Isolation. Boredom. Expectation. Emptiness. The Old Man and Old Woman over-react to the petty nuisance of mosquitoes flying around them, then yammer incessant inanities to fill up the void of their existence and to stave off their loneliness while they wait.

Their nonsensical dialogue becomes increasingly frenetic as they prepare for the arrival of invited intellectuals and dignitaries to their lighthouse, frantically moving chair after chair into the room until we see double, bumping into the furniture and each other, engaging in petty conversations and overwrought interactions with their imagined guests in the empty chairs, gesticulating wildly and echoing one another’s fatuous banter and proclamations, building to a fevered crescendo in anticipation of the arrival of The Orator hired by the Old Man to deliver his message to the non-existent crowd so they can honor their suicide pact and leave the world simultaneously by jumping out their windows into the dark waters that surround them, assured that their moldering bodies will be together–though not right next to each other–through eternity, and believing that the Old Man’s revelation will be heard by all. He comes. They do. But is it? 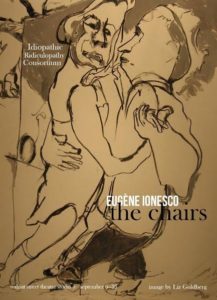 Lisi Stoessel’s set and Erica Hoelscher’s costumes and wigs create a ridiculously bright, frilly, formal surface that contrasts with the underlying bleakness of the theme. Lighting by Robin Stamey accentuates the shifting emotional tone and the ultimate darkness we all face, and Brock’s sound design punctuates the proceedings with the noise of buzzing insects, the ringing of doorbells, and the incongruously cheerful strains of Johann Strauss’s popular waltz “By the Beautiful Blue Danube.”

As promised, Brock and her IRC team “bring good nothingness to life” as they tackle Ionesco’s message head-on, with full-throttle force and an unmatched comprehension of the absurd that will make you laugh till you cry, then haunt you long after you leave the theater. But please exit this trenchant production of The Chairs by way of the door, not through the window.